Home Uncategorized Jogathon
Uncategorized
Carson participated in his first fundraiser last week. I don’t think he had any idea! His school does a jogathon and raises money per lap around the track. He woke up and I told him he’d be doing a race at school. Okay! Any prep beyond that would be wasted. I had Bible study and Trent had to work, so my dad was able to be there to be a “parent” helper and cheer Carson on. He (Bapaw Roy) took some cute pictures of the day. I’m not going to post many, because I don’t want to show the other kids before I ask their parents.
*
Here is Carson and one of his special friends. (wink,wink!) I’m not sure what they are discussing, but I’m familiar with the Tompkins’ flirtatious look, and that’s it. 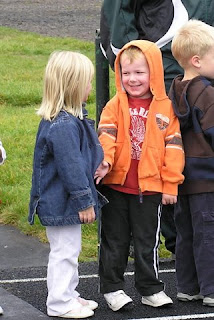 Carson specifically chose his “eagle shirt” because eagles are fast and maybe it would make him run fast. The kids got a bead necklace for every time they ran around the track. Yes, the big track! Here’s a shot during one of the breaks. 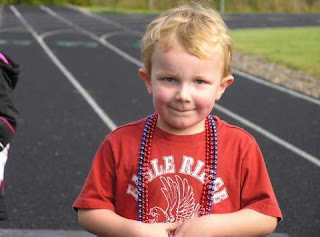 My dad said Carson was just running and running. He didn’t seem to want to walk. He would stop and look around and see if any of his friends were nearby, then just keep on going.

He ended up getting TEN necklaces! That’s over 2 miles! I was bummed that I missed it, but it sounds like it was a special time for Carson to show Bapaw his class and his friends. I heard there was a game of tag with the old guy involved. We were really proud of Carson’s hard work and go-get-’em attitude…even though he probably had no realization what he was running for! 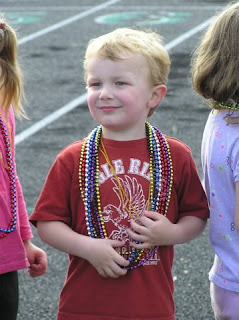