Home Uncategorized The Patch & the Bling
Uncategorized
Oi. What a week! I took a 4 day sub job, and this mostly-stay-at-home mama is not used to the juggle involved with full-time working outside the home. Especially since we have no routine for childcare on length like that, the day-to-day rush of getting them ready to go, figuring out when they needed to be there, who had the right carseats, picking them up and getting myself ready was tiring. I have a new respect for you moms who work full-time! Also, I started the week off with a sore throat and hoarse voice and it never got better. Sydney is also under the weather too. So, no pictures of this week, but these are from LAST week when Carson’s preschool class went to the pumpkin patch.
*
It was a drizzly, chilly day, but we went anyway! The first thing they got to do was ride a pony! I cringed when I found this out, b/c I knew Trent would not be pleased that they rode without a helmet! 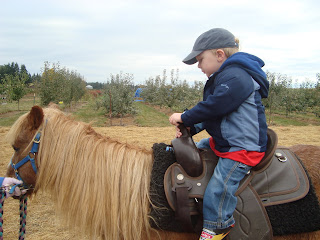 To make matters worse, this sweet older gal wasn’t used to working with such little kiddos, and the teacher and I would have to trot over to them when they were sliding out of the saddle. 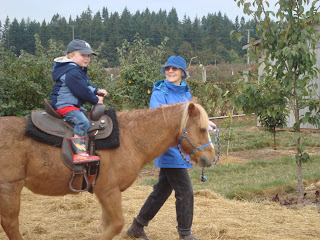 But everyone made it through unharmed! 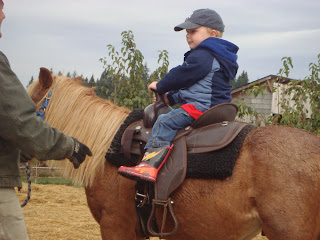 Sydney was along for the ride. She seems happy enough here, but when it started to rain on the hayride, she was less than thrilled. 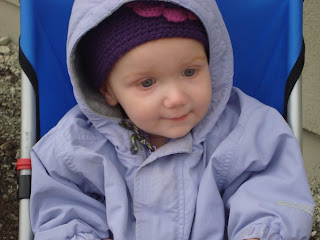 I let her explore a bit. Clothes and shoes can be washed, right? Right! 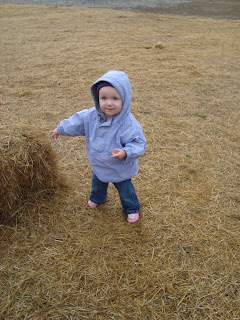 Another parent offered a photo op. 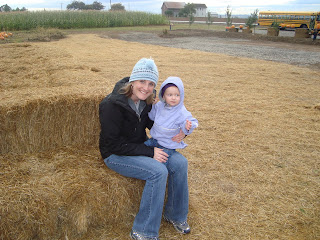 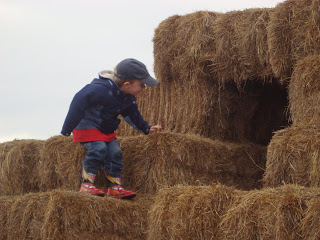 Carson is just young enough to still think it’s cool that his mom tags along on field trips and wants to hug him. This picture was right before it started to rain and Birdie informed the entire farm she wished we had stayed in the car. 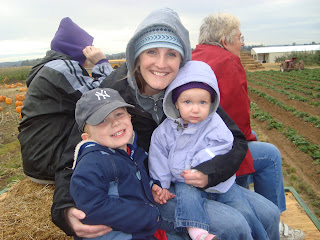 The class going through the corn maze. 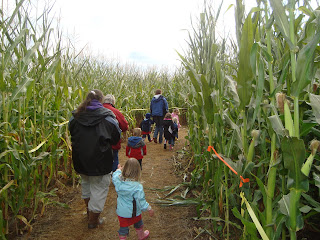 So, I figured it was OK to post this picture since none of the kids are looking at the camera! Ha! This is most of the class. When we first met Mrs. M and she told us about the 13 boys, she was thinking of her other MWF class. It turns out Carson’s class has only 9 kids, which is awesome. But they are still a handful! 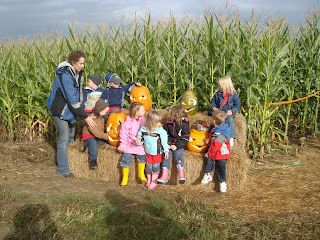 Aaaaaaand, awkward segway into something totally unrelated. Remember those beads Carson got at his jogathon? Well, Sydney very quickly adopted them as her own. 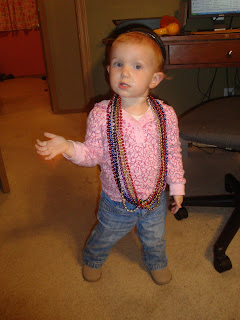 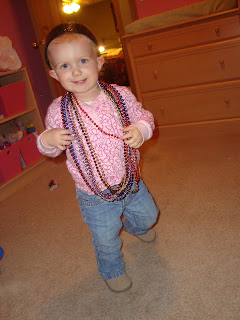 It kind of makes me excited for when she’s a little older and we have more dress-up costumes and things. I think the two of them will have a blast together! 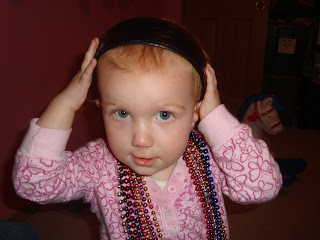