Home Uncategorized There’s definitely a learning curve.
Uncategorized
So, I have two functions this weekend for which I’m providing cupcakes. One is for company at my house tonight. Last night I decided to experiment with 2 different cupcakes styles, both merely decorative and not focusing on the taste of the cake. (Hello, Betty Crocker yellow cake mix!) I thought both would be really easy and look fabulous. I was mistaken. This green grass cupcake is from the Martha book, and it looked so easy, I thought it was my BACK UP! Her version has little lady bugs made out of fondant, but I didn’t have time for that, so I got some sour balls and thought I could just pipe black frosting on. 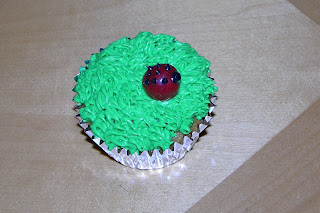 So many things went wrong. First, I could not get the grass green enough. Second, were you at my house last night at 10pm? It was very hot. The frosting was melting literally by the minute. I would pipe on some “grass” and it would instantly melt into one big glob of neon green moss. I tried putting the frosting bag back in the fridge between each cupcake, but that was ridiculously time consuming. Along with the moss-like issues, I would put the sour ball on (which were way to round and dark to look like ladybugs anyway), and it would slowly s-l-i-d-e down the side of the slippery frosting, messing up any semblance of grass along the way. When I finally got the little sourball ladybugs on, the black frosting was not coming out in little dots. It was coming in little spikes. Suddenly the adorable lady bugs in my mind were turning into some severe spikey-shelled animal out of old school Mario Bros. video game. Sigh. I made about 10, but I won’t be serving them to any company. First one over here gets them all! 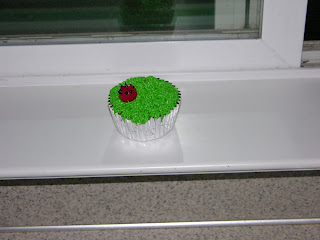 The next plan was a 50/50 success. First, I’ll start with the good: they turned out pretty cute! However, if you cannot tell they are supposed to be corn on the cob, please don’t tell me. Aside from similar frosting melting issues and sliding jelly bellies, they were relatively easy. 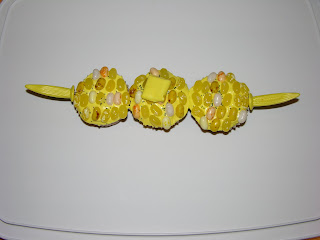 However, I was planning to take these to a large function for Trent’s coworkers, and I was only able to make 4 “cobs” or 12 cupcakes, because I ran out of yellow bellies. There was only one place in town where I could buy just yellows, and you’re looking at $5.50 worth of beans! 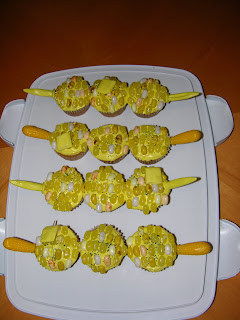 The picture in the book had many more jelly bellies on each cake, but I had to spread the wealth of these golden beans. Also, I got the “caramel corn” bellies, because they were orange-ish/gold and sounded yummy, but now they stick out to me. I would not get those again. 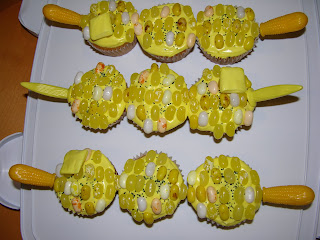 I found another version online that is multi-colored Indian corn for harvest/Thanksgiving, and it was really cute. So, I may have to try it again, even though it is spendy! (BTW, the butter cubes are banana Laffy Taffy, and the pepper is black sprinkles.) So, instead of the work thing, I’m going to serve these tonight for our guests, which works out well anyway, b/c we’re having an outside BBQ so hang on to these last summer days. You’ll know my plate, b/c it will be the one that has all the buttered popcorn jelly bellies picked off and cast aside! 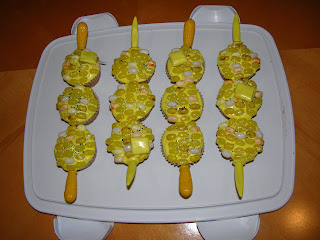