Home Uncategorized That’s more like it.
Uncategorized
This picture is kind of how I imagined having 2 kids would be like. Older sib would happily entertain and thrill younger sib, who would squeal and smile in delight for hours on end at the wonderful amusement while I snuck into the other room to remember what being productive feels like. Hahahahahahahahahahahahahaha! Oh, my! Let me catch my breath after falling off the chair laughing at what I just typed. 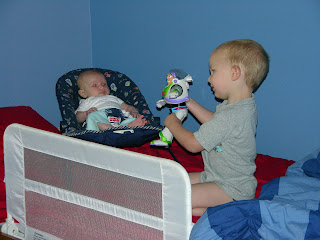 Truth is, this scene was so rare, that I almost tripped racing to get my camera to capture the occasion. I was reading an article in a parenting mag the other day (I DO miss reading a novel, but right now my reading time comes in 45 second intervals, so magazines have to do) that talked about mothers’ guilty secrets; like one mom confessed her daughter really didn’t turn out the way she had hoped–which was, basically, a mini-version of herself. That’s not my secret. Despite any complaints, I do love the little boy Carson is becoming. The other secret the article talked about was having a favorite child. The author made a good point in the fact that when there is more than one child, it’s hard not to draw comparisons and have a favorite. But, the good thing is, your favorite will change–day by day, season by season, hour by hour. And I really resonated with that. It took away some guilt I have the my precious eldest has driven me to drink (ok not really, but he has driven me to tears) out of frustration. When my 3 year old was yelling at the top of his lungs from his bedroom: “I WILL! NEVER! TAKE! A! NAP! NEVERNEVERNEVERNEVERNEVER!!!!!” for 30 minutes straight, and my little 2 month old was laying in my lap smiling up with complete adoration–take a wild guess who the favorite was at that moment.
BUT, later when Sydney was finally asleep after fussing for an hour, and Carson was sitting in my lap making up hilarious stories about his imaginary dog and saying he was “Mommy’s boy, NOT Daddy’s boy!” I had a new favorite. After having kids, I have a whole new appreciation for unconditional love. I’ve never experienced anything that strong before in my life. Liking the kids may be a challenge (daily, sometimes) but loving them sure doesn’t seem to be.
© Copyright Jen Tompkins 2023. Theme by Bluchic.