Home Uncategorized Well. That’s a first.
Uncategorized
Yesterday afternoon our doorbell rang. We were all in the front rooms, so I answered it. There were 2 neighbor girls there, about 7 years old. I’ve met them in passing before a few times. One of them said “Can Carson come out and play?” Huh? Um…..I….don’t know. Trent and I just looked at each other with surprise. Carson, on the other hand, JUMPED up and headed for the door. “I guess so!” I said. We hurriedly discussed that one of us should still be out there in the cul-de-sac (I mean, they’re sweet girls, but I’m not letting second graders babysit), so I took the first turn. He chased them for a couple minutes (with his helmet on–funny) and then the one who lives right behind us said “Do you guys want to come jump on my trampoline?!” Of course, Carson says “YEAH!” and starts following her, while I’m quickly trying to assess the situation and choose my proper course of action. He’s not even three! My gut is telling me I should not let him go play by himself at someone else’s house; they are really nice, but I don’t know them very well. However, our backyards are connected, the trampoline has a safety net, and if I stand on our deck, I can see their trampoline just fine. SO, I quickly set out some ground rules: 15 minutes, and only on the trampoline where I can see him–not in the house. He had a blast, which is a double edged sword: I love hearing him laugh hard and have fun, but that means future requests will come soon and often. I could hear and see how sweet the girls were to him. (I think they think of him as their little baby doll or toy thing.) I sat down to read, and I could hear when they were done, so I told them, over the fence, to walk straight up the driveway and I’d meet them out front.
*
Evidently, in the 45 seconds it took to walk from the trampoline to the driveway, Carson had invited the girls (or they had convinced him–I’m still not sure) to OUR house. Oh great. “The ‘dirls’ are gonna play on MY play park!” He announced, and they happily were following. New set of questions: Do their moms know where they are? Is it OK with them that the girls are here? Is it inappropriate for Trent (adult male) to be in our yard supervising 2 little girls we barely know, even if they kind of invited themselves over? (We decided yes, but that meant it was still my turn to supervise.) Of course I let them, and suddenly, C-dogg was in heaven. 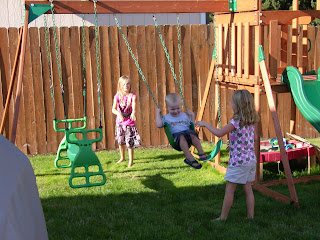 For about 10 minutes he had a little harem that attended to his every whim. But then I could see that the girls were a little more interested in our swingset than in Carson. And I could also see that our discount swingset was perfect for a preschool kid who weighs 35 pounds, and not so perfect for 2 elementary girls swinging hard–it was rocking pretty good. Carson was no longer really playing WITH them, but just watching in amusement. I waited patiently as long as I could, then made up some excuse about how I needed to get ready for dinner, so we needed to “say goodbye”–which was my polite way to say “Time to go, dirls.” I’m glad we have young families in our neighborhood, and both families are really kind and friendly. But they’ve already come by twice today asking to play with Carson in our yard, and I’m wondering if I’m ready for this new stage of childhood!