Home Uncategorized PT Days 3-5 and Happy Dad’s Day!
Uncategorized
First, I want to give a shout-out to my hubby, whose special day to honor him started with him getting up with the munchkin and letting me sleep for another hour. I awoke to him cleaning out poop from the toddler toilet, and nothing could have made me love him more! Happy Father’s Day, Trent! 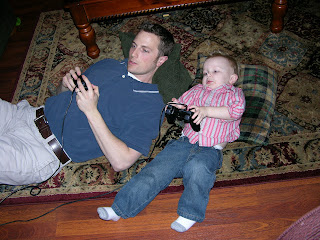 Which leads me to the PT update. It is a roller coaster ride, people. A stinkin’ roller coaster. Day 3, Friday, I needed to run some errands. After 2 days of morning poops in the unders, I chickened out and put a pull-up on him when we went out. Even though we stopped to use the public restroom 3 times while out, his pull-up was soaked. Carson “cannot” pee unless he is naked from the waist down, so public restrooms now entail me and my huge belly kneeling or bending down in a tiny little stall to undo shoes, socks, pants and unders or pull-ups, THEN put them all back on. It is An Ordeal, to say the least.

On Friday afternoon, he had as many accidents as successful trips to the potty, and I was getting really discouraged. He was kind of putting up an attitude and running away from me, not wanting to put the undies back on, etc. So, at one point, I just gave up temporarily and let him run nakers after a trip to the potty. Then I sat down on the couch. He came in a few minutes later and said “Mommy, come here!” And I, throwing a little ‘tude of my own, said, ” What do you need? I don’t want to come right now.” “I pooped in the potty!” he said. ALL IS FORGIVEN! He HAD pooped in the potty, and to top it off (figuratively speaking) he had gone in all on his own. Of course there was wiping, hands washing, toilet cleaning, stickers and candy to be given, and much gushing and encouraging from me. Two steps back, two steps forward.

Yesterday we had a wonderful day (which will have its own post) because both of our families came over for a pre-Father’s Day BBQ and family work day. They helped Trent construct our new swing set, which is awesome. It was also great timing for potty training because A)Aunt Tara brought him cool new boxer briefs which he did not want to get wet B) Lots of family around who graciously applauded, encouraged and even supervised trips to the potty and C) He stayed home all day and had lots of opportunity for success. He had one accident before everyone got there and one later that night, but mostly a very good day. AND he went poop on his own again–I mean, in the proper receptacle.

Today: one step forward, one step back, another 2 steps forward. Started with successful pee and then poop in potty. Hope. Smiles. Pride! Then, he got snotty with me and refused to take a trip to “try” on the potty. I told him we didn’t want to have an accident, and he said “I want to have an accident.” Approximately 30 seconds later, he sat RIGHT NEXT TO ME and peed on the couch. I was TICKED! No punishment (I just have a hard time with that–even though I thought this one was NO “accident”) but I’m not above a full-on mother guilt trip. “Oh, what a bummer. I’m so sad that you chose not to sit on the potty. We need to tell Daddy that you had an accident because you wouldn’t sit on the potty. Accidents are not fun to clean up. I’ll be next time you’ll sit on the potty when I ask you to. Now you can’t wear your new underwear…” etc, etc. BUT then we left the house for the first time in undies and went to church, lunch and a tour of the hospital. Thanks to an attentive teacher, diligent Daddy and LOTS of potty trips, he came home DRY! We didn’t have to use the 2 extra changes of clothes I brought. 🙂

So, this will probably conclude the day-by-day, play-by-play commentary, as some of you are probably bored to tears. But, I have learned that potty training takes over your life, so I will have little else to write about for a while. Thanks for all your support!