Home Uncategorized PT Day 2
Uncategorized
Well, the rest of Day 1 deteriorated quickly. Rather than relying on the timer, Carson seemed to master the art of peeing in minuscule increments, approx 7 minutes apart, so that he could maximize his sticker and candy potential, and maximize my patience level and lower back pain. By the time nap time rolled around, I was EXHAUSTED! And I knew he was too. However, he refused to take a nap. This normally hasn’t been an issue…he just has to stay in his room anyway, even if he protests. But this time, he had me trapped. Even though I put a pull-up on him for safekeeping during sleeping, he would call out to me “Mom! I have to go pee!” What am I supposed to do? I mean, this is the FIRST DAY of training. Should I tell him to hold it? Does he even know what that means? Go in his pull-up? Doesn’t that negate everything we’ve been working on all day? He was clearly manipulating the system, but somehow managed to produce that 1/2 tsp of pee each time. I tried to discourage it by telling him he could come out and go, but no more stickers or candy until after nap. Didn’t work. The 2 hours usually spent sleeping were spent arguing, peeing, running away, refusing to put unders or a pull-up back on, back-talk, spanks (I assure you, they had nothing to do with accidents), tears, books….everything BUT sleep. At one point, he was really upset with me, and then he peed on the bathroom floor. I SWEAR he did it to spite me, but I can’t prove it. I finally gave up on either of us resting, and that evening, even with Trent home fresh to entertain, Carson was acting, well, exactly like a toddler with no nap. I wasn’t exactly a chipper, doting wife, either. Carson went to bed around 7:30, which hasn’t happened since he was 9 months old. (He was up at 5:45 am.) 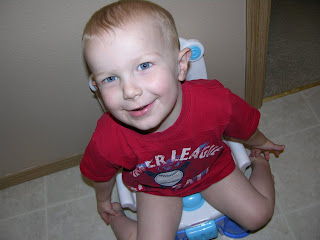 I decided to have a good attitude this morning, because today is a NEW DAY! We had to have our first out-of-house journey this morning, and after the poop incident yesterday, I didn’t risk it. I put a pull-up on him. We had to go to my Dr.’s appointment, and Carson behaved wonderfully. He even peed on the potty at the office. Then we stopped by the Dollar Tree (thanks, AJ!) to get more stickers, since he used up so many yesterday with his dozens of thimble-cup-sized pees. 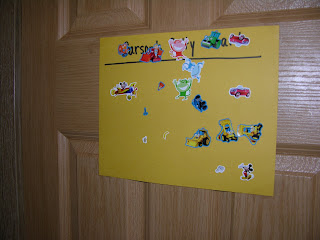 I don’t know if you can actually see this, but I wanted to document exactly how much (or more accurately, how little) liquid he was producing and expecting the reward. 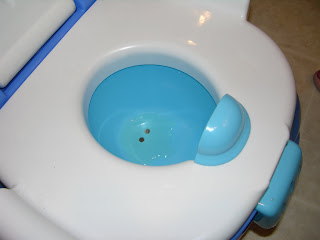 He has had three total accidents today, which is kind of frustrating, because I thought we were getting the hang of this. I try to stay really gentle and positive while expressing how much better it would be if we didn’t have to clean it up and what a bummer it is that he missed out on sticker and M ‘n M. One of those was another big poop in the underpants. The bananas have helped a little, ifyouknowwhatImean, but it was still a mess and a huge hassle. I’m worried that this is something we’ll be dealing with for a while.
However, the drilling finally wore him out today, as you can see from this picture taken about 30 minutes ago. So, at least he’ll be in a better mood tonight, I get to update all you eager readers, eat my lunch in peace and then maybe even close my eyes for a bit. I’ll be sure to update you if anything momentous occurs! 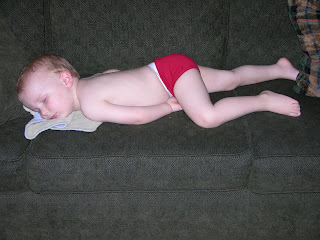