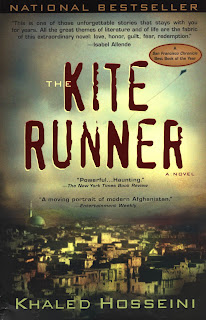 True to form, I just finished reading this book that was all the rage about 4 years ago. Whoa. It was a tough read. I don’t mean that I had a hard time pushing through it. If any of you have read Wicked, the book that the broadway musical was based on, now that book is hard to get through because the plot is so complex and dense.

The Kite Runner was tough because of the subject matter. The story is about two young boys who grow up in Afghanistan in the 1970’s, and follows as they grow. Their childhood relationship is complicated enough–one is the rich boy, the other is the son of the rich family’s servant–and then the hard knocks just keep coming. We’re talking sexual and physical violence, the Soviet regime in that counry, followed by the even more violent Taliban control. Anyway, it is packed with emotions–love, guilt, fear, loyalty, terror, redemption–but it also deals with some of the most evil horrors of any culture, let alone one that is ravaged by poverty and violence. This is not for the faint of heart, but it opened my eyes to a facet of history that I really knew nothing about. I don’t know if I can say I really enjoyed reading it…I’m still debating whether or not I want to see the movie. I couldn’t put the book down, it is an easy read in that manner, but I also was sobbing uncontrollably at a few parts. Anyone else read it? What did you think?
© Copyright Jen Tompkins 2023. Theme by Bluchic.