Home Uncategorized The Happiest Place on Earth
Uncategorized
I gotta tell ya: I was really excited about Disneyland. I had high hopes, despite my claims that I was keeping my expectations low. This was a vacation spot for us as kids, Trent and I went dozens of times when we were in school, and they just go over the top to make it a super fun environment. I knew that taking a 2 year old all day is risky. He could have a meltdown and refuse to have fun at any moment. But he didn’t! The day went just about as perfectly as it could have. We got through all the lines before the park opened, and they let you on to Main St. up to a certain point, where you all crowd around and wait for the clock to strike 9. 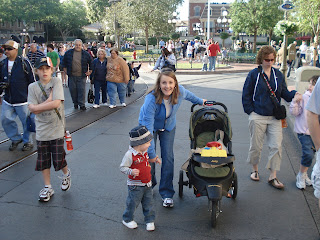 Can you feel the excitement? (And smell the SPF 50 on that pale little head? He did not want to wear the hat.) 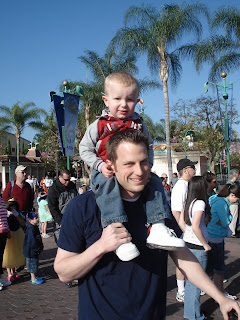 Then, promptly at 9, all these overly cheery Disney greeters let us into the park, there was some kind of Disney inspirational power ballad blasting on the loud speakers, and everyone sprints off to try to get to their favorite ride before the lines are too long. I was proud of us for walking quickly but having a very calm attitude about others who were a little more pushy. 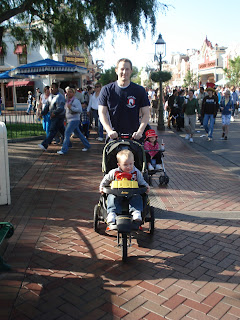 You see, as we were preparing for this day, I told Trent there were 2 things that I really wanted to do with Carson. Two things that I would feel very disappointed if we missed. The first was to ride on the new(ish) Finding Nemo ride, which was rumored to have crazy-long lines because it was so great. (It’s the old submarine ride transformed with cool underwater CGI.) We were by ourselves, b/c no one else cared enough to get up and leave so early, so we just decided to go straight to Nemo. We had to wait about 30 minutes, but the line was moving really fast. The ride was fun. Not worth much longer than a 30 minute wait, though, if you ask me. Carson was leaning forward into his window (below) until it got really dark and the sharks and the electric fish thing (from the movie) came close to our window and it was a little scary. Then he leaned back into us and was totally still and silent. But, he said afterwards “My not scared.” 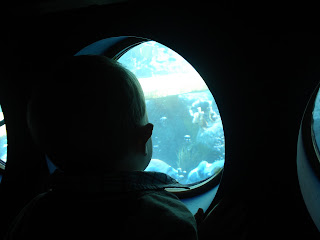 The other ride I really wanted to do was the Buzz Lightyear ride…also new for us. We’d heard it is really fun. So, when we got off the Nemo ride, Rachel and JJ were there with Lucy, the little girl Rachel takes care of. (No, not their love child for those of you who inquired.) We were on the right side of the park, so we decided to just go 2 for 2 and do the Buzz ride. THEN. On our way, who did we see? BUZZ LIGHTYEAR himself. Oh, the joy! See, we don’t have the Disney channel, so Carson only kind of knows who Mickey and Donald are. But he has seen Toy Story and Nemo and Monsters Inc about 100 times, and he loves Buzz and Woody. He couldn’t stop looking at him. 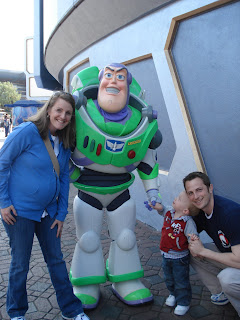 Then we got to go on the ride, which provides each car with 2 laser guns, so you can shoot at targets throghout the ride. JJ and Trent took it quite seriously. Rachel, Lucy, Carson and I were a little more laid back, as you can see. 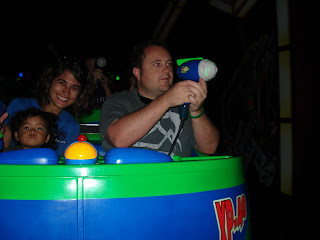 Here’s Trent trying to get Carson to steer the car towards the targets. 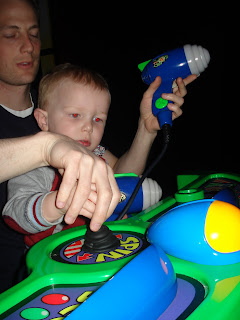 So, we’d only been in the park for 1 hour, and we’d already hit our two main priorities–AND seen Buzz. It was great! Then our friends started coming, and we just hit up some classics, like Dumbo and the Teacups. Here’s Kipp with Carlee and Howie with Tanner in front of us. 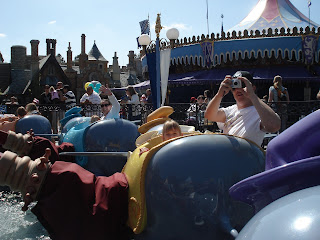 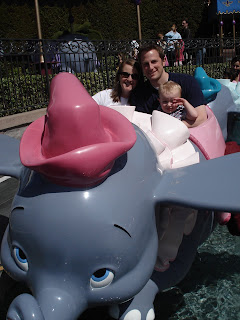 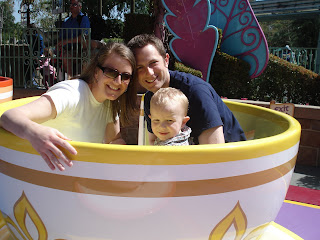 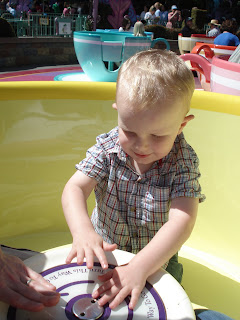 Ashley took a spin with his two girls. Carlee, who is 5, is really into collecting and trading Disney pins. It was fun to watch her get to trade with some of the Disney employees. 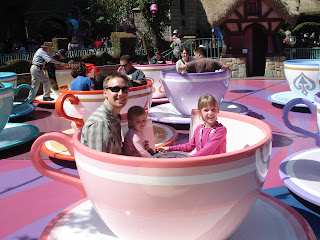 It was a miraculous feat to get all the kids on this Toon Town car without hitting each other or falling off, so we realized getting smiles was out of the question. 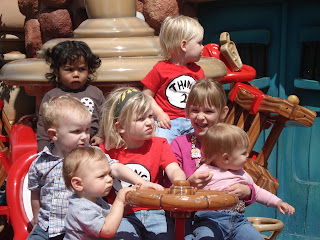 The stroller brigade made its way through the park. (Oh, BTW, Small World is closed for 10 months for a major renovation.) 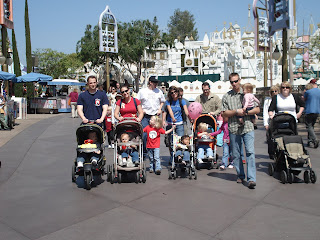 While these three guys went on Splash Mountain (a certain child within kept me from riding my favorite rides)…. 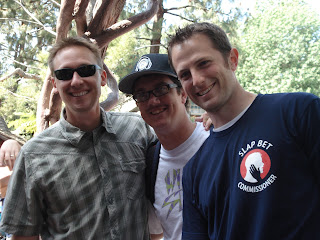 We waited in line to meet Winnie the Pooh and Tigger too! 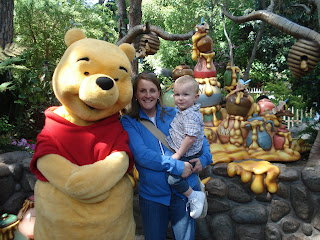 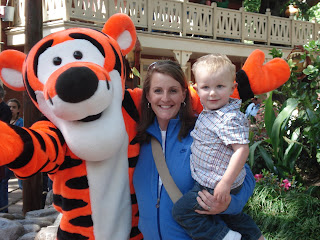 Aren’t they cute? They got so many comments on people who loved the Thing 1 and Thing 2 shirts. 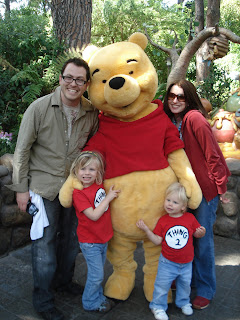 Right at lunchtime, Carson konked out in the stroller Tanner so thoughtfully loaned us. True to form, the sleeping only lasted about 45 minutes, but it gave him a second wind. 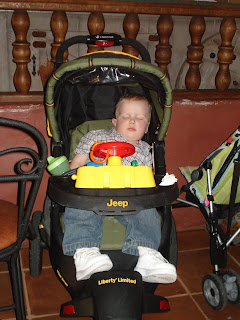 Another no-no for me, but Carson and Trent joined everyone else at Autotopia. He was thrilled to be able to steer. 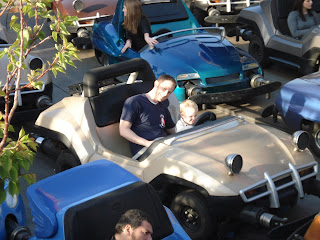 We rode Pirates of the Caribbean, then went to the Jungle Cruise, which I love. It was a chance to sit down, hardly any line and Carson was pointing out animals left and right. 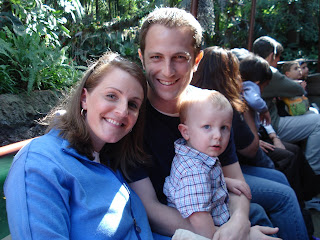 Another thing I have NEVER done was sit down and wait for the parade. Sarah snagged a primo spot for us on the curb, and we got a great view of all the characters and floats. It was so fun and festive. I’ll spare you the parade pictures, because the parade the next day was even better. 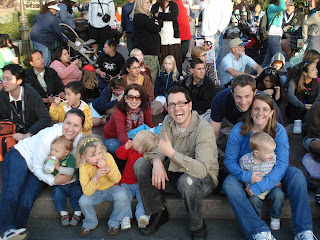 At the end of the night, we bundled the boys up (in PJ’s too) and Carson played with his Mickey sword from Sarah. We were all exhausted, but couldn’t think of anything big we had missed, so we left around 9pm. 12 hours of fun, frozen bananas, Mickey ears, swollen ankles and cameras aplenty. Yeah! 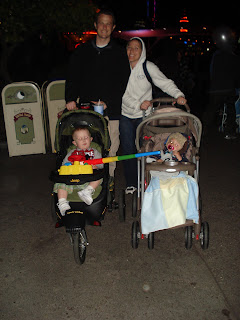