A few weeks ago, when I stuck my tongue out at Carson, he smiled and stuck his tongue out back at me. While you may be dismayed that I am teaching him (with special tutoring from others) this trick, for me it was such a milestone. He’s becoming a little person who responds to me with a purposeful action! There’s a little brain in there! Smiling is obviously wonderful and melts your heart, but that is a reflexive response. Now we are getting to the part where he has to work at his responses. Two nights ago, after at least a month of coaching, Carson used his first sign language to sign “more” during dinner. You would have thought he had just spouted off multiplication tables the way we were rejoicing. We even gave him the ultimate reward in his eyes: pedialyte pop. Then last night he waved goodbye when Grandpa Tompkins was waving to him. It was a big deal! How funny that these little feats that were only mildly amusing when they happened to someone else’s child now seem like newsflashes worthy of announcing to the world. What’s really fun to think is that we are just at the beginning of so many firsts. 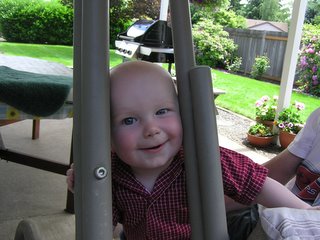 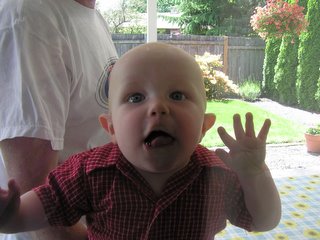