Home Uncategorized Making Friends
Uncategorized
This weekend we had a great time at the beach, staying in a cabin near Camp WiNeMa. I haven’t laughed so hard in a long time. It was also a good time for Carson to get some social exercise interacting with some friends: 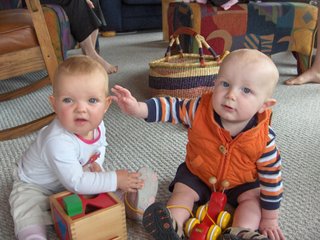 I know it looks like he’s about to pull her ear, which is not nice to do to a new friend, but it was actually quite fun watching these two, who are only about two weeks apart in age. They were both chatting and practicing their “sharing.” Her name is Katie, daughter of our friends Emily and Peter, who are visiting family in the states from Denmark for a few months. 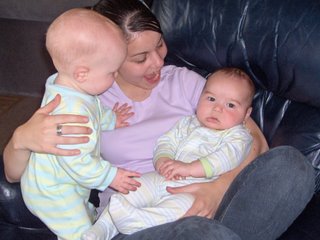 I can’t tell if Carson is using Becky for balance or it he’s getting ready to push off of her and dive onto Ethan. The boys in their semi-matching PJ’s were so funny to watch. Carson is working on petting the doggies and used the same motion on Ethan’s head. It worked pretty well until Carson decided he needed some leverage to stand, so he used Ethan’s head, pushing it into the carpet. Ethan is so laid-back he hardly put up a fuss. 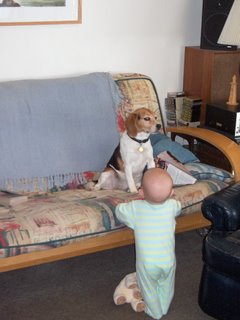 The dog whisperer. With a wedgie. He already got that one dog at his feet to “play dead.”