I used to be that annoying friend who teased and guilted others when they would start a blog and then neglect it.  Well, now I’ve become the neglector!  And I’ve decided to let go of the guilt.  I’m not giving up the blog, but I just don’t think I’ll update it as frequently as I used to.  Right now I’m just in a season where I don’t have time to write and the adoption is in a stage where I have nothing to write about.  I still love writing. I still think several times a week about what a great story this or that would make.  And I’m making a conscious effort to limit my commitments this spring to prepare for Asher’s homecoming, so maybe I’ll have more time to write–and something to write about. To, to sum up: don’t write me off yet.  And I’ll try to give you a glimpse of some stuff that has been happening.

Life has just seemed to FLY by this fall.  I was talking to someone the other day (which was what?  a month ago?) and used that same phrase: “the other day” and realized the day in question was mid-August.  I blinked and it was December.  Which, to be honest, to a person who feels in a perpetual state of waiting, that’s not a horrible thing.

Speaking of waiting, it’s no secret that the wait is getting longer and harder than we ever anticipated.  All of us Thai mamas are dealing with it differently.  Strangely, it seems that a shopping trip to Target that ends in grief-stricken tears has become a right-of passage for many.  My coping method du jour is total detachment.  As I just told my friend Jessica, when people ask me how the adoption is going I just kind of shrug and stare blankly with a dead smile.  I might try to explain 1st approval and how it’s a really important paper that comes from Thailand, but that the people “in front of us” in line still haven’t received theirs, so I have no earthly idea when ours will come.  But mostly I just give some pithy cliche about worth the wait.  Lately, it’s been feeling not very real…like I’m playing a strange online game and downloaded a picture of cute little chubby Asian baby.  I’m sure some psychology major would tell me that I’m in denial, b/c the pain of acknowledging that my child is on the other side of the world being cared for by someone else and I have no idea when I’ll get to see and hold him is too painful to face.
*
Another big deal around here this fall was that my husband accomplished a long-time goal of running a 50 mile ultra marathon. Yep. You read that correctly! He ran 50 miles in one day. Straight. Went to the bathroom once. Never sat down. It took him about 9 hours and 45 minutes.  He’s been training with amazing discipline for months, but had never ran farther than 32 miles prior to the race.  (I know…it takes a crazy situation to be implying that running 32 miles is not that far.)  We were nervous about the weather and how his mind and body would hold up under such incredible stress.  But he did it!  I was so proud of him.  We both agree that his success is largely due to his support team.  Three of his closest friends, Mike, Eric and Jim (who was the leader of the support team), came and spent all day with no other focus than helping Trent succeed.  Jim set up a literal base camp with all forms of calories, hydration and first aid.  The race was set up int he shape of a Q.  It started at the tip of the tail, and the runners had to go around 8 times, each time going all the way back to the starting line.  The support tent was set up right where the runners left to the loop, so every hour and fifteen minutes or so, Trent would go by us twice in 10 minutes.  One of the guys would run out to him, run or walk along with him and see how he was doing, take his water bottles and ask what food sounded good.  When he said nothing sounded good, they forced him to eat anyway.  As he walked to the tip of the Q tail to turn around (following me?), they would quickly refill bottles and warm up soup broth on the camp stove, while discussing Trent’s current mental health (which was spotty around lap 5).  Then, for the last 3 loops, one of the guys ran with him the whole time for moral support.  It was an amazing and humbling act of friendship to see.  I get a little choked up just thinking about it! 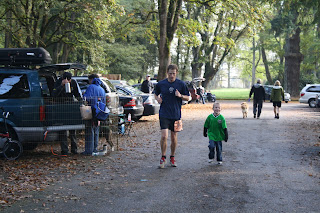 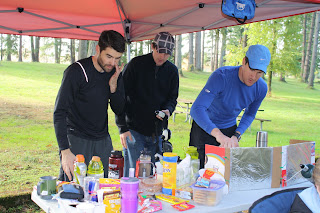 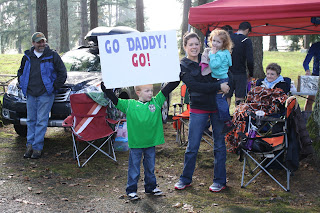 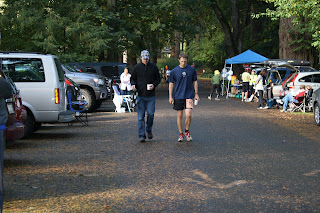 * The other big and exciting thing that happened in the last month, is that I. Joined. Pinterest.  I’ve known about Pinterest for a long time, but had refused to join, because I was afraid it would be an internet worm hole that sucked my time.  And I was exactly right.  If you don’t know, Pinterest is basically your very own online bulletin board.  You have different categories of boards (the ones I use most are crafty, decorating or recipe-based) and when you want to bookmark a webpage, you “pin it.”  You choose a jpg from that page to represent that page and it saves it for you on your bulletin board.  Then, at any time you can go to your board, click on the pin and be taken to the original web page.  ﻿You can also “follow” friends who are on Pinterest and see what they’ve been pinning.  It’s completely enjoyable and total eye-candy for me.  But, in my defense of the hours I’ve already spent on the site (pretty much replacing blog time for me), I’ve tried at least a half dozen new dinner recipes, and have made (or started) as many crafty projects.  It has been completely inspirational and motivated me to actually get off the computer and DO things.  I don’t have a lot of pictures yet, but here is a picture of my Pinterest inspired Christmas countdown advent calendar: 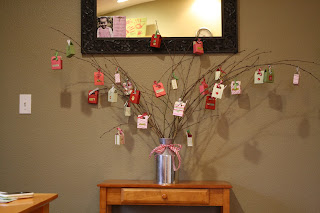 I used the paper boxes we’ve had for a couple years, cut some branches from my back yard and used a 50% off coupon to get that tin jar for $4.  Win!
I will try to blog about how our Christmas countdown has changed for the better this year, but no promises.  And no guilt!
© Copyright Jen Tompkins 2022. Theme by Bluchic.