Home Uncategorized “I survived the Warrior Dash!”
Uncategorized
That’s what the t-shirts say, and that’s what I say!  The Dash (as those of us who know the course intimately can call it) was SO. AWESOME.  I’m not kidding!  Yes, it was hard.  Yes, it was filthy muddy.  Yes, the obstacles were crazy.  Yes, I overexerted my out-of-shape-self into a very near vomit situation more than once.  And yes, I will be one of the first to sign up again for next year!  One of my favorite things in this world is to be with people who don’t take themselves too seriously.  This place was SWARMING with people who did not take themselves seriously.  We were in the minority by not having a funky costume to race in.  We saw lots of tutus (men and women), lots of kilts, and even a couple guys running in FULL business suits, including briefcases.
This photo-log is a combination of pictures from my mediocre camera, Mike and Jim’s much-better-quality cameras, and pictures I got from the internet.
*
We got these stylish hats as part of our swag.  These are the girls I ran/walked/hiked the course with.  Tristan, Michelle and Kristen. 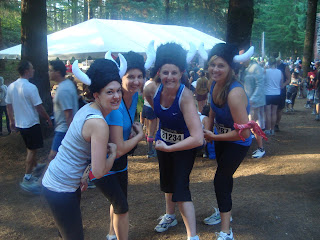 This picture cracks me up.  We are so naive.  So pumped with adrenaline.  So clean. 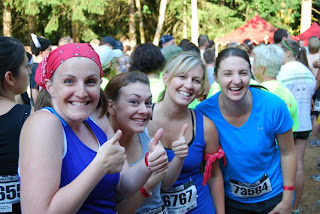 The race starts out with a bang–our wave in particular, which was the first of the two day event.  You run for about 20 yards on a steady flat trail, then there’s a very intense hill.  I don’t remember seeing many people running up that.  Almost everyone started walking immediately, save for a few annoying go-getters.  To spice things up, the race organizers had failed to notice that the trail went right smack dab through a yellow jacket nest.  We kept hearing people hooting and hollering in front of us, but I thought they were excited for a small downhill slope.  Nope.  They were being stung.  Michelle and Kristen both got stung twice, as did Becky and Jenna in the next wave.  We were still reeling from that fun surprise when we saw our first obstacle.  The volunteer who was working this obstacle told us “Say goodbye to dry!”
*
It’s called Deadweight Drifter.  You have to wade into the pond (which we were promised would only be WAIST-HIGH, and clearly was deeper in most spots) and somehow get over all the floating logs.  (click to enlarge for a better view.) This is a picture from another friend of our obstacle during a different wave.  It was not that crowded when we were there, but getting over the logs was a huge challenge!  No preparation was adequate for the feeling of just walking straight into a lake, fully clothed.  The muddy floor of the water was randomly full of holes and hills, which was…interesting.    To add insult to injury, Kristen got a deep scrape/shallow cut on her leg while hurdling the logs. 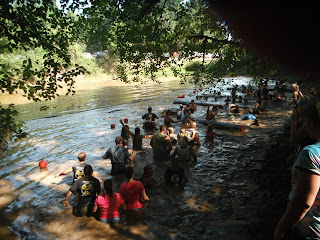 This isn’t a picture from our race, but our next obstacle was similar to this.  It’s called Road Rage, and first you have a field of tires to hop through, then you climb over several wrecked out cars.  This is interesting when the cars are wet and muddy from all the people who were ahead of us (so, lots of people) who were dripping from the lake.  This was also the place where poor Kristen had to stop and talk to a medic to get her leg bandaged up. 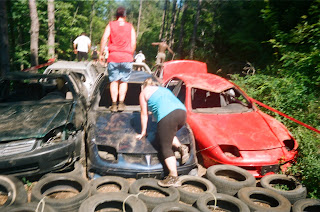 This is the Warrior Wall.  It was kind of intimidating.  I’m not used to climbing a wall while holding onto a rope.  But the most unnerving thing was at the top, when you straddle the wall and climb down the other side. 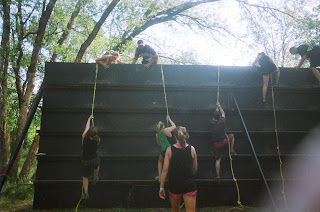 Here’s Becky and Steph on the Warrior Wall!  Woohoo! 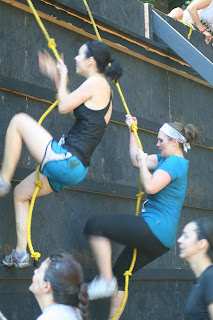 This obstacle is called Rubber Ricochet, and by the time we got there, all the fast runners were ahead of us, and all the slow walkers were behind us, so we had the place to ourselves.  It was not very difficult. 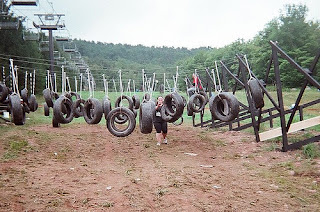 I wish I had a picture of the front of this next obstacle.  This was not the Deadman’s Drop from our race.  First, that drop you see did not have a lovely step.  Ours was just a big ol’ wall of plywood.  And the other side is another climbing situation, but the top had a very strange, rectangular thing that was leaning against the direction you’re climbing.  Being at the top of this was one of my least favorite moments, but Tristan and I talked each other through it.  Then you grab the top of that wall with your fingers, hang down (we chose to face the wall) and slide down, hoping you don’t get splinters on your face or your muffin top. 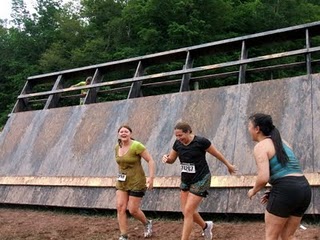 When we reached this obstacle–can’t remember what it’s called, but I call it over/under–the really fast, competitive people who started 30 minutes after us started catching up.  So suddenly we had some very in-shape people crowding up in our space and getting irritated that we were in their way.  I kind of pushed through this pretty quickly–you have several walls about 4 feet high to hurdle, and in between each one, you have to get on the ground and go under a barb-wire fence.  Five of each, I think?  Well, after this up/down/hurry situation, I entered what I call “The Vomit Zone” where I can’t talk, can’t run and can’t hold still, or I was 100% sure I would toss my cookies right in the path of all those muscular guys on my tail.  It lasted a few minutes, then I was able to walk it off.  Whew! 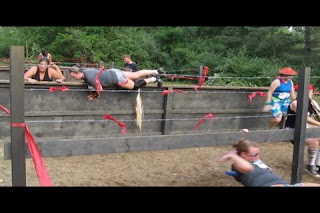 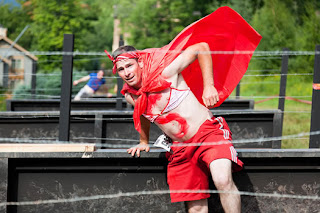 There were a few more obstacle I didn’t get a picture of, like one where you go up rickety, 3 foot-high “steps” and then slide down an equally-rickety fireman’s pole.  And also a few non-official obstacles, like when we got to a shallow ravine and everyone had to rappel backwards for 10 feet or so.  THEN, we got to another Big Hill.  It was a killer!  I welcomed myself back into The Vomit Zone, even finding a designated puke tree, but somehow escaped without total dignity loss.
*
We had heard that the best way to cover this cargo net bridge called Chaotic Crossover was to roll.  I tried that and it HURT!  So I animal walked it like these folks here: 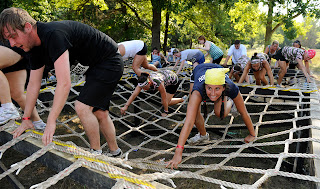 Soon we knew we were reaching the last portion of the course, b/c I saw our friends with their cameras.  I remember hearing the guys cheer for me and it gave me a boost!  Even though this cargo wall was high, there was so many places to hold on, it didn’t seem difficult.  Here’s Tristan and me near the top. 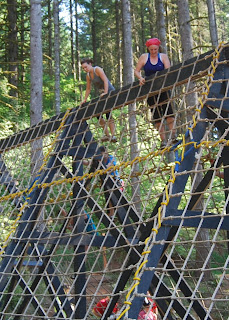 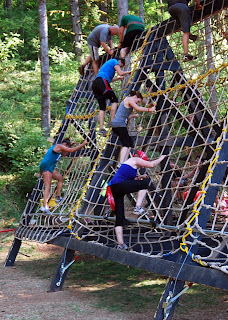 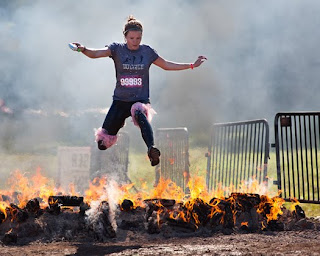 I don’t have a real picture of me doing the fire jump, but Sport Photo did.  I tried to copy the link here, but it’s not letting me.  It’s a good pic, but I’m too cheap to pay the $20 for a 5×7.  Then we entered the last obstacle, the piece de resistance of the whole thing: the muddy mayhem.  It’s a huge, man-made mud puddle with barbed wire over it.  You crawl through and are forced to get filthy.  It’s great! 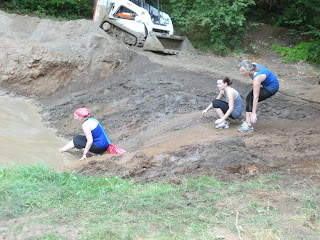 I think this is a shot of Steph, Becky, Sarah and Jenna?  It’s hard to tell! 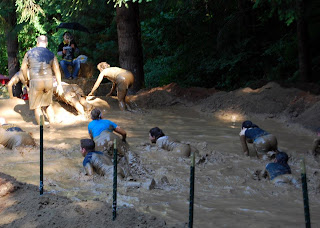 Tristan and I making our way through… 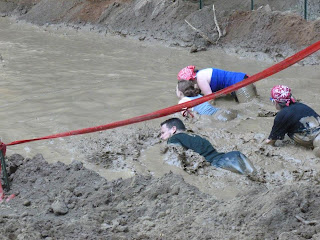 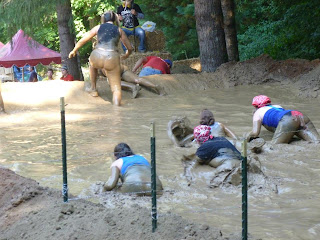 At the finish line!  We did it! 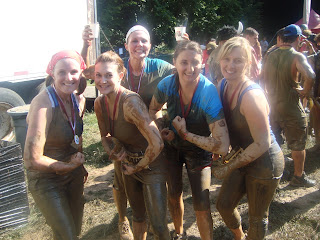 Here’s me with the BCC crew…the ones who talked me into this crazy idea. 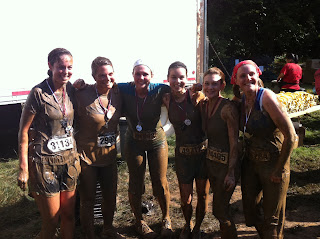 I was trying to get a picture of my chip, which was crazy disgusting.  This was after I “washed off.”  The Dash people have a huge pile of yucky shoes where you can donate your shoes to be cleaned and given away to charities.  The socks went in the garbage. 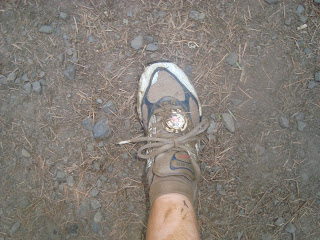 By the time we finished, Kristen’s cut didn’t look great–and was covered in mud!  So she stopped to have it cleaned up a bit.  And her and Michelle’s bee stings were getting really sore!  They are true warriors. 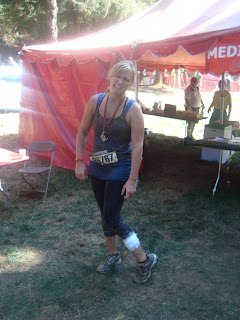 All participants get a free beer and we splurged and got a huge turkey leg.  Just look at that thing!  We couldn’t resist.  But in truth, I really wanted this picture.  I don’t like beer and the turkey leg was mostly salty turkey skin and fat.  I gave the beer away and tossed the rest of the leg. 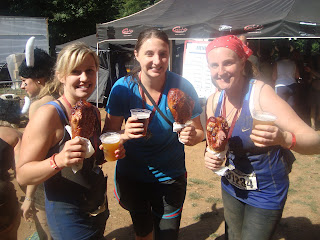 This might be my favorite shot of the day.  We were mostly divided between 2 waves all day, but we all “washed off” together in the lake at the end.  I could tell the husbands were rolling their eyes at our dramatic, girlie talk as we relived the race while standing in muddy water.  But we were all pretty darn proud of ourselves.  And we were already planning our costumes for next year! 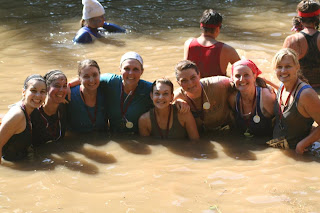