Home Uncategorized Too cute
Uncategorized
During “Less Screen” week, Carson was snooping around in our bedroom and found two HUGE three-ring-binders under our bed. One was full of baseball cards, the other full of basketball cards. They are from Trent’s childhood and part of the traditional, coming of age “you finally have your own house so now you have to take your childhood junk out of mine” booty that we were given by my in laws several years ago. Hence–it’s valued under-the-bed location.
Well, within one of the notebooks, Carson came across a memento of Trent’s trip to the Washington DC area with his grandparents in 1989. He was eleven years old: 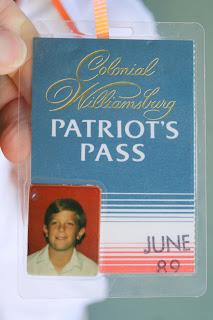 Carson was extremely taken with this old ID tag. He decided to make himself look as much like little Daddy as possible. In fact, I had no idea he had discovered any of this stuff until he came out in an entirely new outfit. He had located the only white, collared shirt he owns (though slightly too small) and put it on. He also changed from jeans to khakis, because “I think that’s what he’s wearing on bottom.” He asked me to put a ribbon on the tag to make it a lanyard, and even tried to pose himself to look like Trent in the picture. The whole exercise was just TOO CUTE! It was a good reminder of the importance of a father/son relationship and just how much this little guy looks up to his Daddy. 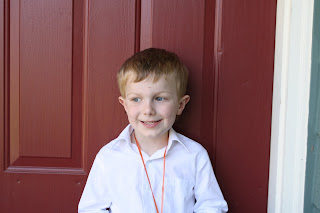