Home Uncategorized Aaaaaand…wait some more.
Uncategorized
Although we have not received the official word from Holt regarding how many referrals were made in March, I’m fairly certain that we will not be getting a match to our child this month. Strangely, as each day went by and there was no call (despite my sometimes embarassing DASH to the ringing phone–even once leaving the shower dripping wet), I became more and more accepting of the situation. I’m bummed. But not heartbroken. The reason I think I’m not devastated is that March was a longshot for us. We knew that. Now, if we get to June 30 and no call? There’s going to be some strongly worded prayers. And blog posts. And pretty much general this-wait-is-going-to-kill-me brand of freaking out.
*
But something that helps eleviate the pain of three more months was this: the reason I’m pretty sure that we will not get a referral is that I know of at least one referral that was made over a week ago. A precious, healthy boy was matched with a great couple that I’ve had the chance to just briefly get to know in this online world. This is their first child. There was a time this month when J & A thought that they would not get a match either–despite being #2 on the list. Now, this would be devastating for anyone, but J pointed out that after trying for almost 5 years to have a child, an additional and unexpted 3 months was just almost more than she could bear. As soon as I read her words, absoluting feeling the joy overcoming the sorrow, I was filled with joy FOR them! I thought I would be pretty envious of whomever got their referral this month, but I couldn’t be more ecstatic that they were the ones.
*
I am curious to get our post-referral update from Holt to see how many families were matched with their children. Of course I’ll keep you posted as we move on up the list and anxiously await our turn to see our babe’s face.
*
But as a distraction, we’ve tried to participate in a few other families’ adoption fundraisers. Here’s C and S sporting some shirts we bought to support the Andersons (leaving for Thailand THIS WEEK to pick up their Siri!) and the Carters, adopting from Ghana. Go to their blogs for info on how to get your own! Now I think it’s my turn to get a shirt, which I plan to do to support Lee and Rory’s adoption (Ethiopia). If you’re interested, just be sure to specify their name at checkout.
* 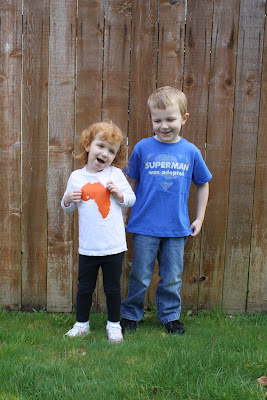 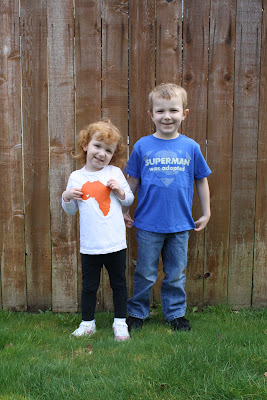