Home Uncategorized The Classy Shepherd
Uncategorized
I remember when Carson was born I literally thought ahead to his first preschool program and how fun it would be. Well, we were out of town last year, so here he is 5 years old and this was his first one! We got there 40 minutes early to get good seats, and the way the seats were set up in the gym, we were on the end of row 3 and the people in front of us had scooted towards the middle, so things were shaping up with a big open space in front of me–great view of the stage!
THEN, two minutes before the program started, a group of about 30 people walked in and there was not very many seats left. So the “ushers” (who were some high school kids with good intentions, I’m sure) brought in a ton of chairs and crammed them smack-dab in front of us. We were no longer on the end and no longer could see the stage. My inner sense of justice was waging war with my (not as strong) inner sense of compassion and mercy. I had done everything right to get what I want and now these late-comers were BLOCKING MY VIEW!
*
So I abandoned all hopes of being the cool, calm, collected parent (and my husband’s hopes of his wife keeping things into perspective) and walked to the front row, crawled on my hands and knees and sat down like the obsessive stage mother we all hate. Well, turns out I didn’t crawl far ENOUGH, and when Carson’s group came out, an adorable little angel’s halo was still blocking him from me and my camera! I had to keep my lense pointed until our angel moved her head for a sneeze or sniff and then: CLICK!
* 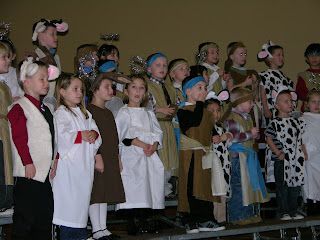 I don’t know if you remember before he had hair, but our sweet little boy has got some serious personality in his ears. 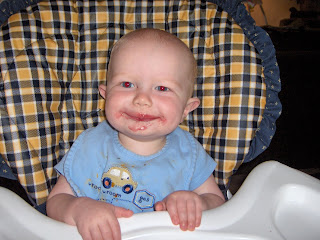 I get a chuckle whenever he wears a headband or headpiece of any kind that tucks behind his ears, b/c it reminds me of those early days: 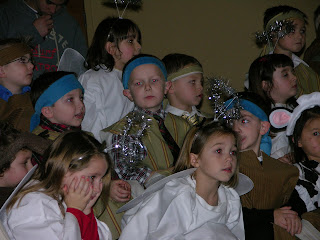 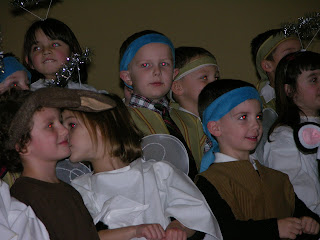 I’m bummed that this one is a little blurry. You can see Carson was determined that people know he was wearing a tie. He brought it OUTSIDE of his shepherd costume. Maybe it’s the issues of GQ I’ve been getting him. 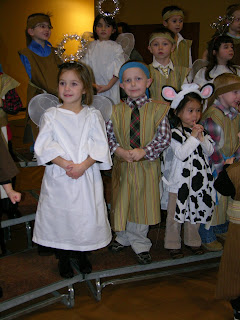 Hee hee! So cute. (Sidenote: the precious little cow on his right? She’s a Holt baby. :)) 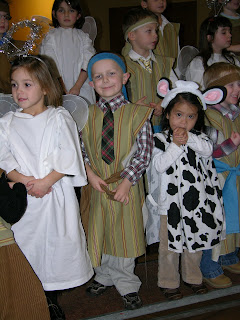 Here’s a quick vid of the kids screami—er, “singing” Go Tell It On the Mountain.


And not to be left out, the next day I heard Sydney singing away, sitting on a box that had come in the mail. She sings around the house way more than Carson ever has. Somewhere in there I’m pretty sure she’s singing about “My Daddy and Baby Kaitlyn,” but mostly it’s just Ooooooh and eeeeeeee.