Home Uncategorized Carson’s Day
Uncategorized
It was not Carson’s actual birthday, so his real birthday post will come on Wednesday. But yesterday we did have a pirate birthday party for Carson. He’s been counting down to the party since June–literally! If you follow the blog, you know that I like to have some fun with the cakes, and this year I was googling images of a pirate ship cake and Carson saw one and said “THAT ONE! Can you make that one?!” I truly wasn’t sure IF I could make that one, but I studied the picture and read the few tips that the original baker had left and decided I’d give it a try.
*
It started with 3 9×13 cakes stacked on top of each other and very loosely shaped like a boat. 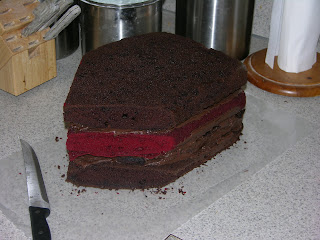 I froze them that way overnight, used the extra pieces to kind of make a deck and covered the whole thing with regular frosting. From a can. Even though the thing was already slanted and sideways, I decided not to stress and imagined that it was just being gently tossed by the waves of the sea from side to side. 😉 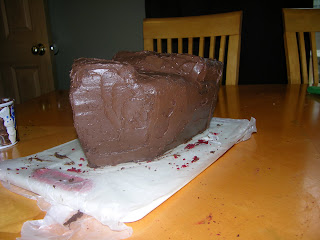 The next 5 hours were extremely messy, very focused and had moments of sheer terror. Therefore, I did not have the presence of mind or clean hands to grab a camera. Just use your imagination. Then the next day when we took it to Jojo and Bapaw’s house, we assembled the sails and TADA: 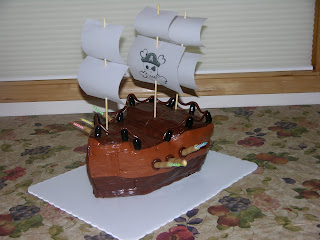 It does look a little like the whole thing was shellacked, which was not intentional. I made marshmallow fondant, because it’s the cheapest way to get fondant, but I’m not sure I’ll do that again for a 3-D cake. When it got warm, it got really slippery. Then I froze it overnight to keep it all in place–which kind of backfired, because there was frost, which, when melted, added to the slippery effect. Anyway, hopefully these are details only the person who stared at it for hours and hours can notice at first glance! 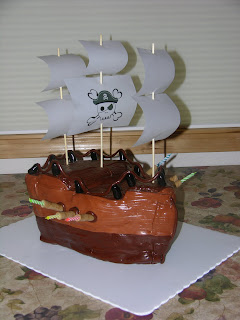 But this was all that mattered: 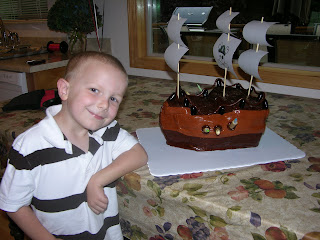 Carson loved it. Another super fun surprise for his party was that Aunt Michelle dressed up like a pirate to celebrate! He wasn’t sure what to think at first, but later he told me he thought it was “so tool!” (cool) 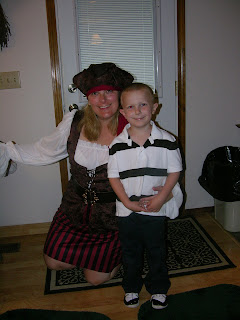 This is Captain Carson and his pirate face. We had bandannas, eye-patches, tattoos and face paints to draw beards for any of the kids who wanted to be in full-pirate mode. When we first came up with the idea, I imagined a gorgeous group shot of all the kids dressed to the max. I was proud of myself for lowering my expectations and just let any kid and parent do whatever they wanted with the supplies and I didn’t request a group shot. That’s major self-control for me, people. 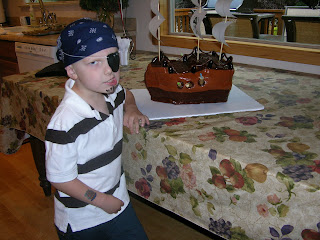 The first game we played was “Walk the Plank.” 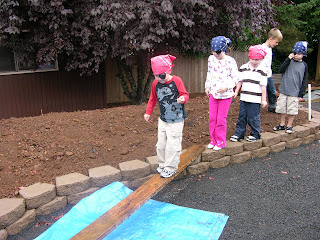 Here’s all the little matey’s waiting their turn. 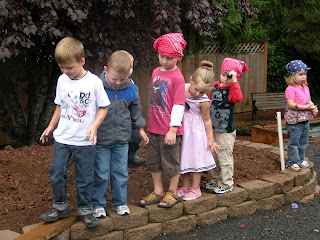 Then we played “Cannonball Blast” (in the garage because of the rain) where they had a cannonball tied to their ankles and tried to pop each other’s. 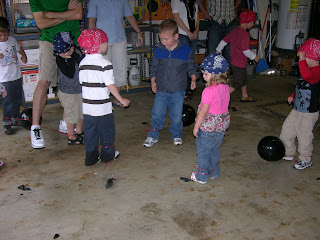 Then came “Swab the Deck” where they took using brooms to sweep balloons around some obstacles. 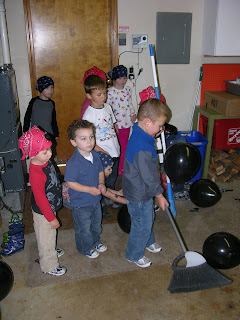 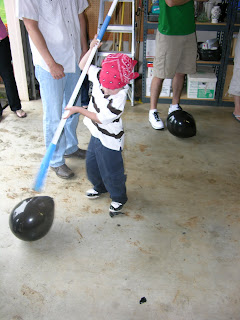 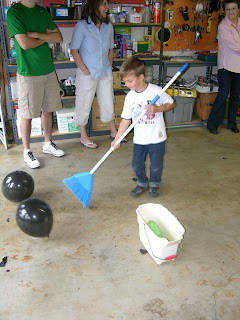 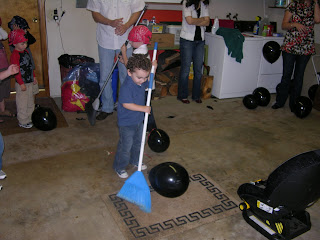 Arrrgh! Captain Abby kept her duds on the whole time! This game was boring her a little though, I think. 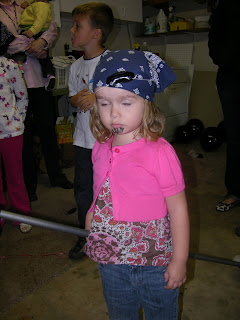 The last game was a short treasure hunt. I gave them one clue to find the map: 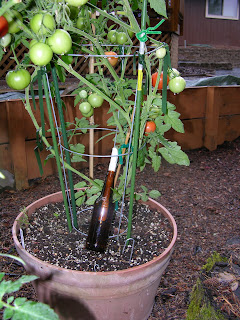 Looking for the map: 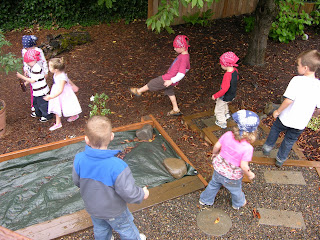 Listening to the clue. 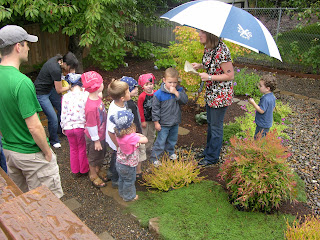 Here’s where the treasure was hidden! 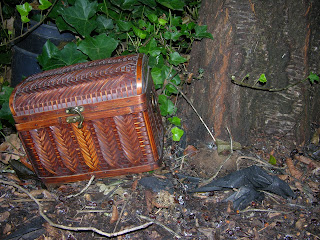 Hadessa found the treasure, but kindly let the birthday boy open it and share the booty bags with everyone. 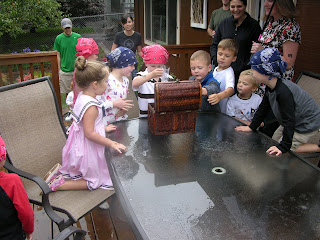 Wyatt found things to entertain himself. 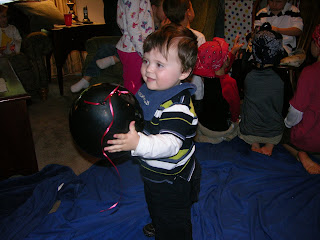 And Sydney insisted on holding her cousin, evening thought Kaitlyn is almost as big as her. 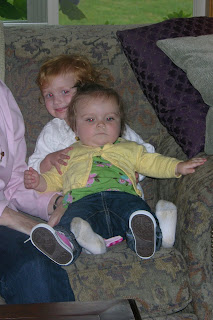 Carson was absolutely showered with gifts and is still on a present-high today. This particular gift (Toy Story 3 Wii game) has been on his wish list since before the movie came out last spring. 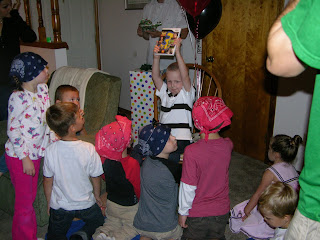 You can see he still has the remnants of his pirate beard on his face…and maybe some mustard as well! 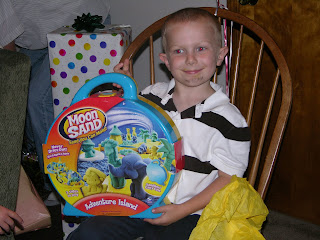 Uh-oh! His OWN set of golf clubs! 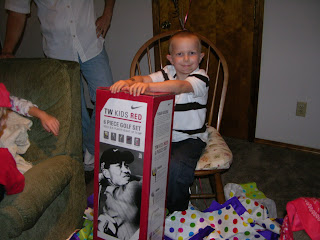 Blowing out the canon candles on his cake. 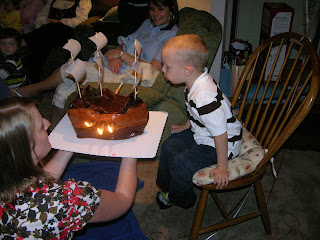 Lots of work, but so much fun to celebrate my little man! 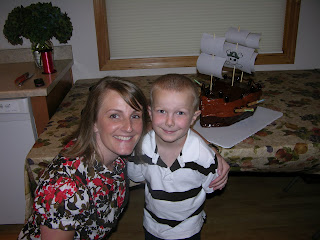