Home Uncategorized Haiti
Uncategorized
I’ve been wanting to blog about my time in Haiti 15 years ago, because the memories have been pouring. And, you know, this is my space to text-vomit my thoughts and feelings and you all have the option of reading or skipping! First, I need to give a shout-out to Mr. Lefebvre, who is sporting some SaWEET shorts in the picture below. He helped lead my trip to Haiti and his wife Jan was on the trip last week. They are dear family friends and readers of this blog. Still haven’t seen Jan in person to give her a hug, but I can’t wait to soon! 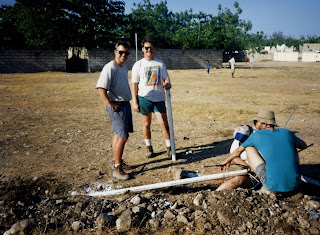 During my senior year of high school, I decided one night that I needed to be a part of the church trip going to Haiti. As far as I know, not many (if any?) teenagers at that point had been a part of these frequent teams. My friend Stephanie decided together that we needed to do it. Geez, look at these pictures! I was just a baby! (17) It seems interesting to me, looking back, that I didn’t wear make-up or do my hair the entire 2 weeks. Could I be that unself-conscious now?
*
Most of the time, we did what I call male/female split: Men did physical labor, and the women taught women’s classes, vacation Bible school and worked many days in the medical clinic. Working in the medical clinic was amazing. Way too many great stories to share on one blog post. We had a couple MD’s, some nurses and the Army sent over some dentists.
But we each had one day of household duty, and this was a cake I made the night I was on KP duty: 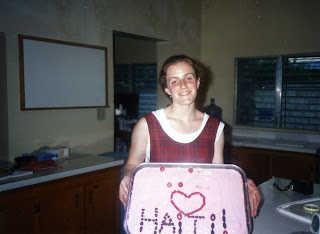 The trip was a significant and defining spiritual experience for me. I would even use the word pivotal. I had seen poverty in Mexico, but what I saw in Haiti absolutely BLEW MY MIND. Plus, the spiritual warfare was palpable. We would sit on the roof of our dorm at night and hear people in the village singing their voodoo chants, and participate in the local Christian church service the next day. I saw what I believe was a true-life miracle in a TEENY infant who was literally starving of malnutrition. Even as a clueless teenage, the sight of her frail body frightened me. Her mom said she wouldn’t nurse–hadn’t for many days. I was holding her as she was inconsolable and NONE of the docs or nurses could get an IV line into her 1-inch arm. I could see the stress on my friend Dr. Edmund’s face, and I was fighting back tears of fear and wondering why I was the one still holding her. We all stopped what we were doing and gathered around her and her mother and prayed. The child immediately (I mean, upon AMEN) calmed, and one of the nurses was able to get the IV in, giving her lifesaving fluids and nutrients. The baby then promptly pooped on me. Can’t make this stuff up, people! She came back for several days while we were there for more fluids and giving the mother some food helped her milk supply as well.
*
In the picture below, see this wall behind me? This is part of the inner wall that surrounds the Lifeline dorm. The walled dorm is part of a much larger compound, which also has a cement brick wall. The compound is many acres and has a school, medical clinic, church, shop, and a very large field. The day of the earthquake, the 58 ladies from the US were handing out hundreds of gifts to the Haitian children who are sponsored by US citizens. They brought them into the courtyard of the dorm, lined them up on benches along this wall. Over 400 gifts were given out. Kids lining up, waiting, getting their gifts, leaving. Less than an hour later, this very wall collapsed, CRUSHING the benches where dozens of children had been sitting. Sorry if I’m adding some drama with my CAPS but that is significant to me. 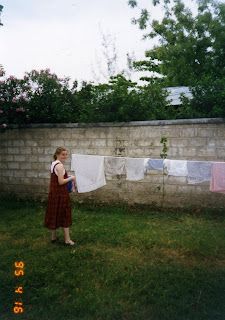 This pic (below) is a shot of the outside gate and wall of the entire compound. 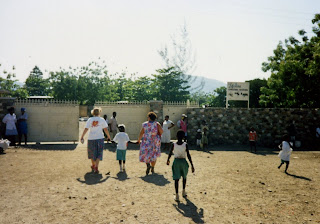 On the wall near the gate, there is a faucet of clean water for anyone who needs it. From what I understand, this portion of the wall that is made of stone, withstood the earthquake. However, most of the perimeter of the wall was made of cement bricks, which did not. 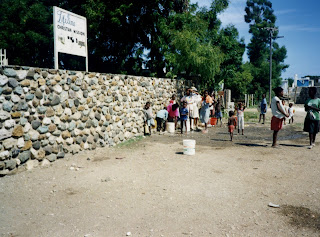 This is my friend Stephanie and I at the dorm. Jan was walking down this very flight of stairs when the earthquake hit. 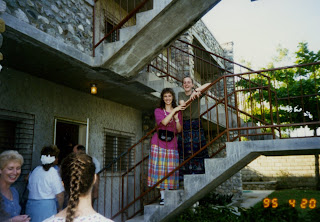 Here’s another picture of the dorms. As you can see, it is also made of a lot of stone walls, a foundation which held up last week. 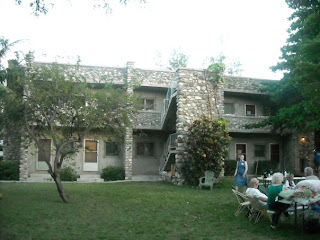 This is a shot of me being silly, peeking out the gate of the dorm yard. You can see our housing behind me. Since 1995, they have added some things to this area, including a little carport in front of that gate. 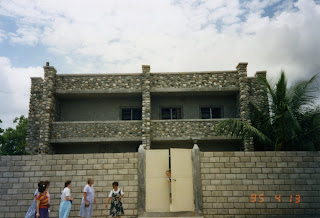 This is a picture of that gate from a different angle–after the earthquake last week. 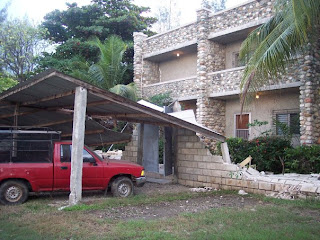 This is one of the school rooms on the Lifeline compound. 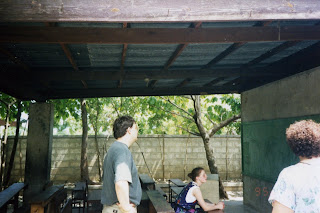 This is one of the school rooms last week. 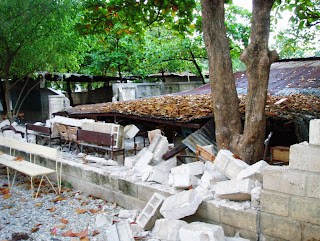 Haiti has had varying degrees of political unrest for years. When we went in 1995, they were experiencing some. The US sent troops in to help keep the peace. Here are a couple of the army guys who came to help their dentist friends in the clinic. Of course they let the two giggly little American girls hold their guns and try on their hats and packs. At the time it seemed great fun, but now I can totally imagine how Gerry and Dan Ferguson must have been eyes rolling at the sight. Ha! 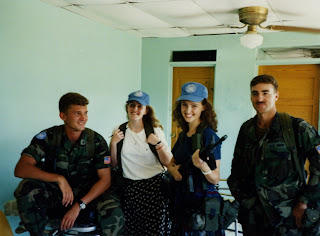 This is a picture of the Lifeline church, also on the compound. From what I hear: it is still standing! We had great times of worship in 2 languages here, and Dan preached with a translator for the 3 hour Sunday morning church service. 🙂 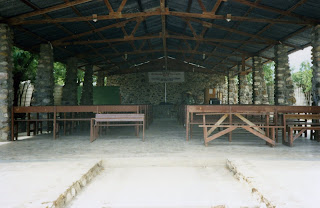 As my first truly international experience, Haiti was integral in forming me as an adult. The experience created in my a desire for more travel, an awareness of a world beyond mine, and an interest in cross-cultural ministry. (I later went to work for Dan full time in the Missions department and got to travel to Asia and Africa!) I would not say that I have a huge bond with Haiti, or that I’ve always wanted to go back, but I would say that the country itself holds a special place in my heart. Obviously my experience there, and its significance, plays a role in my emotional investment of the current situation. Although my friends are home safely, and so is Keenan, my prayer is that I won’t forget the ongoing challenges that will face this small country for a very, very long time.
*
The best place I’ve found to get almost daily updates and hear stories of HOPE in the tragedy is http://www.livesayhaiti.blogspot.com/. You can give at http://www.haiti-relief.org/. Also, please check out http://www.lifeline.org/, where you can give financially or participate in donating disaster relief supplies.
© Copyright Jen Tompkins 2023. Theme by Bluchic.