Home Uncategorized Jungle Safari! Part 2
Uncategorized
My only regret about Carson’s party is that I didn’t take any video. I think it was a wonderful glimpse into his truly enchanted childhood. (He may not think it is enchanted, but I see how all the pieces of his life add up to nothing less.) He was surrounded by all of his extended family–blood and “adopted”– who love him, encourage him and shower him with gifts and affection while supporting his parents in this crazy job of raising him. His backyard was decorated with streamers and balloons, and his young friends and cousin(s) joined him in playing on the swingset, opening gifts and eating some pretty yummy cupcakes. I was very proud of the way he handled himself amidst the possible chaos! He seemed grateful (or at least excited, which is similar in 4 year old emotion-land) for each gift and didn’t have any meltdowns. It was wild and fun…just like a safari should be!
***
Special shout-out to Ivy M, who was one of the first to wear her animal hat and proudly sported it throughout the party, even when everyone else took theirs off. That shows good promise for a self-confident girl! We put the hats in the laundry basket, let the kids choose and brought the mirror out for them to see what they looked like in the hats. 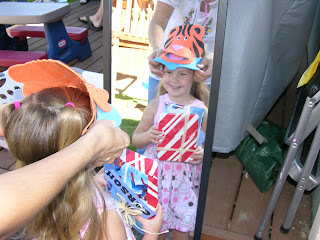 Here’s another stinkin’ cute girl (whom, hint-hint, Carson is not related to by blood, just FYI for future dating scenarios), our little Abigail! She did like her Monkey hat and I heard she and Ethan wore them into Walgreens later in the week. 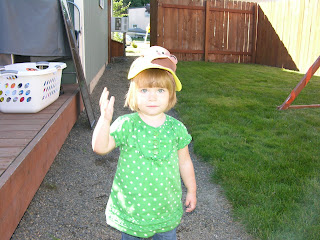 Here’s the birthday boy when he arrived. As I mentioned, my sweet in-laws took the kids the night before so we could clean and get ready. He fell asleep on the drive back to our house, so he was a little dreamy-headed when he came in to his own party! 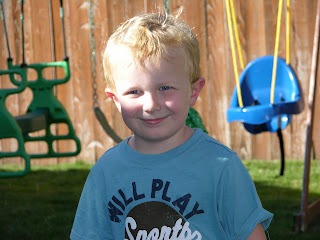 The look on his face cracks me up! It’s one of the elephant cupcakes, and I swear that was what he asked for, even if it looks like he’s about to complain. 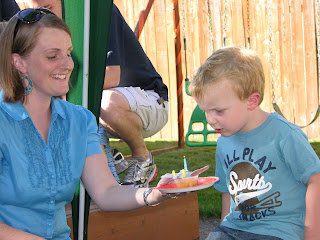 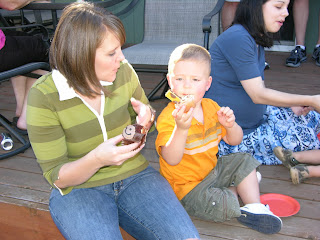 The teeny-tiny kid’s table we got at a garage sale for $5! 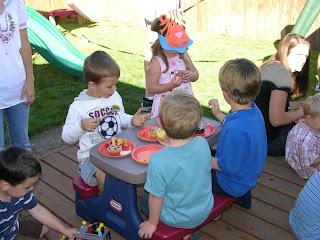 This was the closest we got to having a “kids in their animal hats” picture! It gives you the general idea. I discovered the beauty of Oriental Trading Company online this year and got a dozen hats and a dozen jungle animal beach balls for under $20. They doubled as party favors! 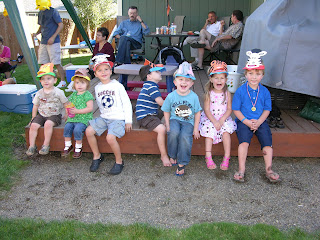 I love watching preschool kids open gifts and see the restraint on the part of all the party-going friends! They did a great job. 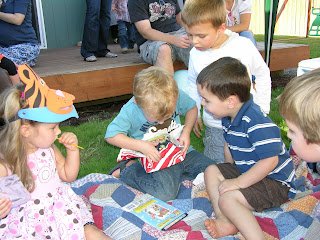 A fun combo: Diego and Wii! 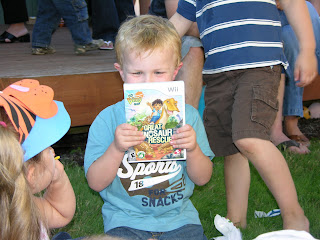 Look at all those little helpers! 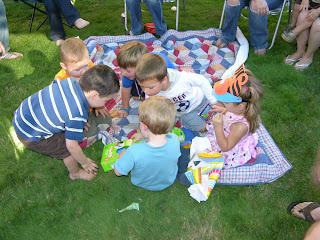 Even though this isn’t the clearest pic, it is a fun moment in time of Carson and his friend enjoying the day. Thanks to everyone who came and participated and made us all feel so loved! 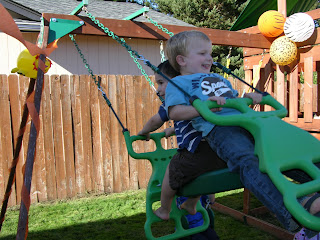