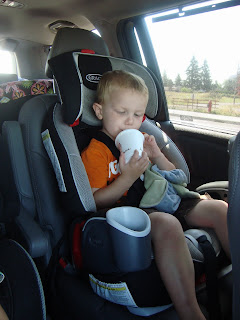 This morning was about the third time that Carson has woken up on his own, and instead of playing in his room or coming to wake up one of us, he just walked on out to the living room and sat on the couch to wait. This morning Trent found him around 7, just sitting there. How long had he been there? “A while.” A couple days ago it was the same, but he had turned on Reading Rainbow. I’m torn on this new development. Obviously I love the idea of him being able to wake up without waking the whole house, and to find a little entertainment on his own is delightful…because it means that I’m still sleeping! But I’m not exactly sure how safe it is for a 3.75 year old to have run of the house whilst all able-bodied adults are unconscious.
*
All toddlers start to have a major independent streak, and, of course, that naturally continues on through childhood. Despite the battles this brings, no reasonable parent would wish for the opposite, or we’d be spooning food into an 18-year-old’s mouth. Sooner or later, they have to take on some chores, willingly or un.
*
I mentioned last week that another new “I can do it myself” situation in our house is that Carson wants to dress himself. And he is physically capable of doing so. Big milestone! However, he is not capable of knowing that orange sweats, dress shoes and a wool sweater are not appropriate for a 105 degree day. He’s also not capable of understanding that I don’t want him to wear swim trunks and the too-tight-t-shirt with a flat, plastic Lightning McQueen that remarkably still blinks constantly, even though it is over a year and a half old when we are getting dressed for church. Just so you don’t judge me TOO much, I do let him have complete choice about 80% of the time. Although I’m seriously contemplating a patent for a button or a hat that says “I dressed MYSELF this way! Don’t blame my mom.”
*
But if I could choose the one task in our house that I’m longing to surrender to my growing child, it would be the wiping of said child’s TOOSH. Now, there are no pictures of this, because I know that a certain generation (coughBABYBOOMERScough) already think I overshare, but I wish you could see this. Thankfully, Carson usually is able & willing to sit on the toilet and do the #2 deed without an audience or moral support. Hooray! However, after a few minutes, I usually hear this in a very, like, total Valleygirl tone of voice: “UM? A little HELP, please?!!” I go into the bathroom and am greeted by a bare heiney staring straight up at me. Carson prefers to be unclothed from the waist down while pooping, so he’s always still unclothed. He also, not unreasonably so, has decided that the best way to make the area that needs attention accessible to me is to, well, he practically points his bum at me. Let’s just say that this is not too far off:

Out of my gracious consideration for my mother, I will not go into any more detail. Oh wait, yes I will. One more thing. I will say that we have tried several times to pass the torch, so to speak, to Mr. Carson to complete the task at hand without help, but that has backfired. Inevitably, less than an hour later, and usually right after buckling the carseat when running late to an appointment, we have complaints of discomfort in the bum region due to a less than stellar wiping job. It’s really lose-lose.

Yet we are not giving up! Preschool starts in less than a month, and the rules require the students to be fully potty-trained and finish the entire job alone. So, we will persevere! And, if you’re still brave enough to check back every once in a while, I may reward you by never mentioning this topic again.