Home Uncategorized Snapshots
Uncategorized
First, here is a supercute pic of my nephew Jack, since (AHEM) his parents don’t blog that often these days. Jack has a Minkee, like Carson & Sydney, but his method of transporting his lovey is as seen in this picture. This is not him being silly or playing peek-a-boo, this is simply his convenient method of transporting Minks, keeping him close and also keeping his hands free for other mischief. It totally cracks me up! 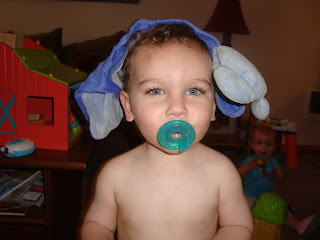 Here’s a shot I snuck of the Birdie as she was sleeping. The position looked so unbelievably uncomfortable I had to capture it. She looks more like a frog in this one! 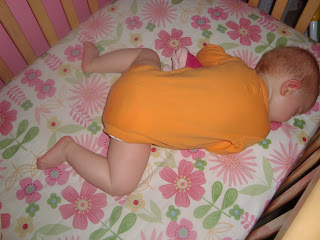 In a moment of weakness the other morning, I let Carson take some pictures with my special/Jen’s only/no one else can touch/pink camera. Here’s a self-portrait. (I think it’s interesting, because one of my eyes closes more than the other when I smile too.) Do you think he looks a little older? For some reason I do. 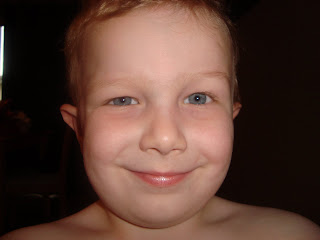 And here’s one he took of his sis. I think she is giving the “fist bump” like her uncle Chad taught her. 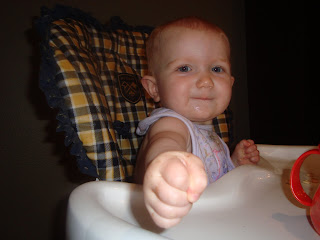 And this is Carson talking to our neighbor girls through the fence. He is totally enamored of them, and always hopes that they are going to come over and ask him to play. This day they struck up a conversation through the slats in the fence, which was good enough. (and great for us, b/c he is allowed to be in the back by himself without supervision, but if they go out front, we have to go too.) 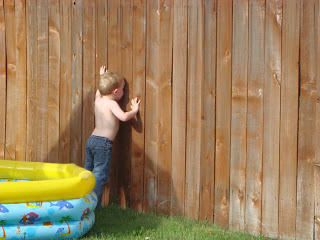 Here’s some funny Carson moments this week. First, he and Sydney were on the floor near me in the kitchen. He was playing nicely with her, but put a pillow on top of her head, which she didn’t like. I asked him to stop. He did it again–harder. She cried. I scolded. As I was scolding, he took the pillow, put it on the floor and threw his head on it, bursting into sudden, loud and totally fake sobs.

Me: Why are YOU crying?

Oh, lordy. I felt like I was back in college with girls crying to each other “I’m so fat!” “I’m so ugly!” just so the nearest red-blooded females would chorus back “You’re NOT fat! You’re thin! You’re pretty!” What a little drama queen he is!

*
Then at dinner, Carson and I told Dad we took the new van down to Jojo’s to give her a ride.

Carson, able to hold a straight face for a few impressive seconds: Oh no! Dad! I think we left the van at Jojo’s! We lost the NEW VAN!

We were both amused with his attempts at our grown-up style of teasing. At least if he has a career on the stage he can try drama OR comedy.