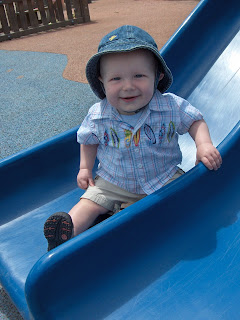 Oh, man. I’m telling you. My son. Carson. OH wow. What amazing things God must have in store for him, because his personality is SOMETHING ELSE. Dr. Dobson compares a strong-willed child to a grocery cart that has a stubborn, broken wheel that makes pushing the cart difficult. It takes a little more work to get the cart through the store, but you can make it. Well, my friends, I’m telling you: these last few months it feels like Carson The Grocery Cart is being pulled backwards (not even sideways) by an industrial strength chain connected to a semi. I can only really put my thoughts into words because we’ve had several good days in a row. “Good” meaning the tantrums and power-battles could be numbered on one hand, and/or his decibel level was low enough as to not arouse neighborly suspicion.
*
I can honestly tell that his innate nature/disposition is of a sweet, loving boy. This core of his personality comes out often at home, especially with his sister, which give me SUCH JOY! He also seems to be pretty well behaved for other adults, even daddy. But many days lately, particularly regular, boring weekdays when I’m the only grownup in the house, he finds a way to make EVERYTHING difficult. Getting dressed is a battle. Going to the bathroom is a battle. Eating is a battle. Going ANYWHERE is a battle. LEAVING anywhere is a battle. Any transition is a HUGE battle. If I catch him in the wrong moment and tell him the sky is blue, he’ll adamantly tell me it is red. And I’ve read parenting books. I continue to read parenting books, and am open to your suggestions. I have subscriptions to THREE parenting magazines. I try to employ tactics like giving hundreds of options, giving plenty of warning time before a transition is coming, etc. I know that a lot of this is about him feeling like he has some power/control, so I TRY to let him have some. But these tricks are not fool-proof, evidently, because this fool of a parent fails miserably quite often.
*
What’s really funny is that Carson & I have a wonderful relationship. But it is rather complicated. I mean, as I just described, we are at odds a lot of the time. However, we are also practically each other’s best friend! Even when I think we’ve had a bad day and I need a break from him, he’ll still cling to me in the evening when Trent is trying to give me a few moments alone. He is my constant companion. Sydney is still a baby, which means she sleeps more than he does and she doesn’t talk. But he and I are together, talking, singing, laughing, arguing, joking, etc. ALL DAY LONG. We talk about things we see, we ask each other big questions and little questions, we have little inside jokes, we recite movie lines to each other, we experiment on projects together…it is so precious! I love him so much I could just cry!
*
And then? There are the times when I do cry. And not because my loving feelings are overflowing. Without making this even longer, I’ll tell you that one of our problems is him making HUGE amounts of angry noise in his bedroom during time-out. (I’m talking about throwing hard-bound books, huge boxes of legos or banging a shopping cart or xylophone repeatedly into his door.) This wakes Sydney up. So, I’ve been trying to find ways to carry out discipline/time-outs on the other side of the house. Last week this was not working well, and I was losing it. My anger was not well-hidden. (I’m not a yeller, but I have a loud, stern voice and a fierce arm-grip that comes out.) So, instead of putting Carson in time-out, I went into the laundry room and locked myself in. I sat on the linoleum and bawled while he was tantruming on the other side of the door. I was so physically and emotionally tired, so angry, so frustrated with him, so disappointed in myself for losing my temper. It was the only thing I could think of at the time that I would not later regret.

The fact that these challenges are coming with my first child is comforting and also disconcerting. Comforting because I look at Sydney and think there is no way on earth she will give me this much grief. Disconcerting because–how do I know? Carson is my first 3.5 year old. Are they all like this? (Some have told me they are.) In my mind I feel like he is on the far end of the “handful” spectrum, but maybe the Birdie will be the same! Oi. But I think what scares me the most is that I am normally a very confident, together kind of person. (Aside from my housekeeping.) I don’t get riled up easily. And for the first time in a long time, I am doubting myself and my abilities and my choices. I’m out of my element, and I’m making decisions left and right that have heavy consequences because they are shaping a PERSON. A person whom I love more than myself, whom I pray over and have such high hopes and dreams for that I can’t even articulate them to you or to him.

Now, please don’t take this ranting post too far. I’m not sitting on the laundry room floor EVERY day! I’ve never endangered Carson in my anger. 90% (OK, 80%) of the time I can deal with the issue at hand, try to remember all my “parenting tricks”, and laugh about it later. But not always! So, partly I share this because it’s on my mind and heart a lot. Partly I share it because I made a small frantic comment on facebook the other day about it, and the responses from parents with similar kiddos encouraged me greatly. Maybe someone reading this needs to know that all those smiling moms & kids at the park (which often is me!) have frustrations and trials at home too. Partly I share because I have faith that a few years from now I will look back and read this and be able to smile that this season did pass. Even in my 3.5 short years of parenting I’ve learned that certain difficult phases usually DO pass. They, of course, lead directly into NEW difficult phases, but we get through them. And reading again about the ones we’ve survived and conquered only gives us confidence for the next one. Partly I share it for myself, as I process emotions through articulating them, and afterwards I feel a sense of relief. Partly I share this so I can print it out and give it to Carson’s future wife when she is a mother. (My in laws tell me that Carson’s strong will, stubbornness, humor & confidence are a mirror of my husband when he was little. This gives me hope! Trent had consistent, God-seeking, persevering parents, and he turned out great!)

*
I’d like to end this NOVEL 😉 with a few glimpses into Carson’s lighter side, which is what keeps me going and keeps me from the child psychologist. This one is from a couple days ago.

This one is from last fall when we were continually playing the interview game. We would take turns holding the clipboard with a paper and pen, asking all kinds of questions. I tried to get one on video.