Home Uncategorized Caution: disgusting photos.
Uncategorized
Seriously, proceed with caution. I’m going for an overshare with the picture journaling in this post. But I’ll get to that in a minute.
*
We’ve been working on letters with Mr. Carson for a while now, like most parents do. For a long time, he was pretty shaky on the details, as is to be expected. He’s not going to be in kindergarten (because of his late birthday) for another 2 and a half years, so we’re not in a hurry. But lately it’s started to click a little bit more. He’s talking about rhyming and spelling. Recognizing the difference between letters & numbers. He puts random letters together and asks us “What does E-P-Q-A-V spell?”
Well, today was the first time I had seen him attempt his own name. He’s identified the letters many times, but I hadn’t seen him put them together independently, without me even knowing he was working on it. As you can see, he still got one letter wrong, but I was impressed. I applauded, of course, then told him that the T didn’t go there, but an R. He was confused about our last name having a T. But he fixed it and put the T at the end. Yeah! 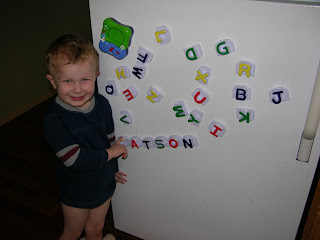 Now, to the grossness. This is for all of you readers who have been worried that we were past the “blow out” stage with our little bird. DON’T WORRY! This one peeked up at me while I was working on the computer the other day. But it’s minor compared to the stunts she was pulling last fall. 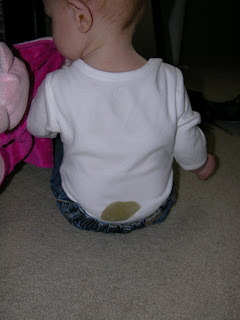 So, the kids (and now I) have been sick this week. It’s primarily a cough/cold. But Carson has always had this special gift of coughing so hard he makes himself vomit. Oh JOY! At least he is getting old enough where if I provide a convenient “throw up bucket” (ours happens to be a Tupperware pitcher with a handle for him) then he is fairly intuitive about getting there in time. Except in the middle of the night. So, you know, that’s been fun.
*
Well, turns out little Sis has the same easy-trigger on the gag reflex. Plus, she’s still figuring out how to eat solid foods. So, yesterday I was with her and she was munching (gumming on) the good ol‘ graham cracker when she started coughing. Then I think it was a mixture of choking on the cracker, coughing up/breathing in some lovely phlegm/the gag reflex, because she started choking, then spewing. It was like something from America’s Funniest Home Videos, but I wasn’t laughing! I was proud of myself for moving mid-hurl to get her to the hardwoods, because I wasn’t really thinking about the mess. I was in panic mode, because she was choking, so I was imitating the move I had been taught and pounding her little back. Here’s the latter half of the evidence. Check out that splatter pattern! Maybe CSI could analyze it. Carson says “she had a throw up.” Yes, yes she did. 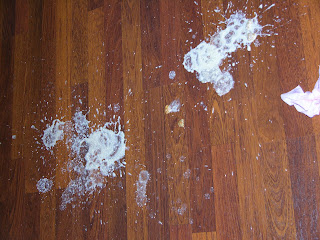 So, now you have lived a day in the life of the Mommy, the monkey and the bird. Hope you’re able to hold to keep from tossing your own cookies!