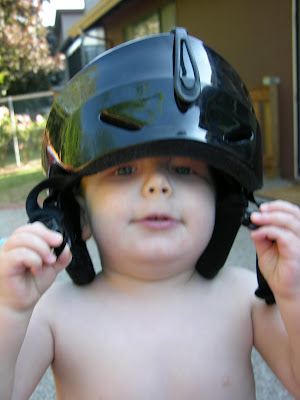 Last summer I was hanging out with my hubby & some of his colleagues. One coworker “tattled” on another, saying they had seen SoandSo riding a bike….WITHOUT A HELMET! Oh my word, by the shameful gasps that went up in that place and the accusatory looks, you would have thought SoandSo was caught swigging vodka before performing open-heart surgery. I was a bit amused and caught off-guard by their–very sincere–shock and stern reprimands. But then I realized: they are physical & occupational therapists whose patient load includes a lot of brain injury patients. Many of them (patients, not therapists!) are severely mentally and physically disabled because of an accident. Although they see some patients who are the victims of being in the wrong place at the wrong time, they also care for some people whose injuries could have been prevented. With a helmet.
The story about Natasha Richardson just broke my heart. She is only 45 years old and has 2 sons, ages 13 & 12, who will now start the devastating process of learning to live life without their mom. She died of a traumatic brain injury sustained during a skiing accident that took place on a beginner’s trail under the supervision of a ski instructor. Sounds like a pretty safe environment, but she wasn’t wearing a helmet. (Trent pointed out that we don’t know for sure that a helmet would have saved her life, but it could have only helped.)
In the past few years, aforementioned hubby has made me a firm believer in The Helmet. This is much to the delight of my safety-crazy mother, who I think would have helmeted us 24-7 from the age of 6 if she had her way. So, here’s an appeal from a helmet-convert…go buy one of these really cool hats if you are going to sled, ski, board or bike. (And I promise this post was prompted by the Natasha Richardson story, not the fact that 6 people I love very much are going skiing on Friday. But, you know…)