Home Uncategorized Chop-chop, Dilly Bars, Jesus and Poop
Uncategorized
So, I cut my hair the other day! Well, that’s not true. My favorite hair girl, Sara N, recommended by Steph, cut my hair. I have basically had the same hair cut for the last 12 years, so it’s nice to switch things up every once in a while.

Last night our countdown activity was to have Dilly Bars from Dairy Queen! Yummy! Once again, poor Sydney gets the shaft on the countdown photo. Sorry, baby!

The night before our activity was to set up the Little People nativity and read the Christmas story from Carson’s Bible. He was uncharacteristically attentive, which was great! 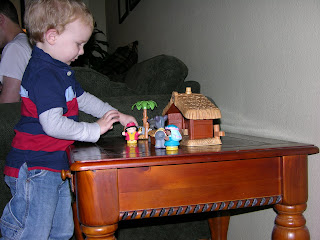 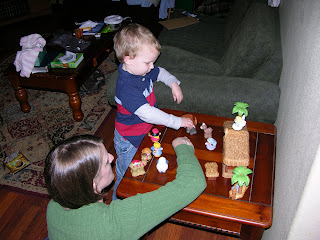 This is a great kid’s Bible, by the way, if you are in the market. 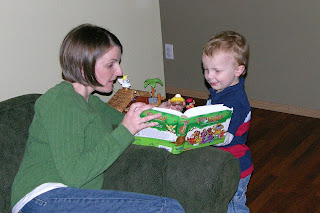 And just because she needs some face time too, here’s our sweet little bird. I know I have lots of pictures of her in her crib, but to be honest, sometimes that is the safest place for her while I’m trying to get something done in the house. All her other hang out places are a little vulnerable for a busy big brother whose is not as cautious as he is affectionate. We have a fab mobile that she watches and squawks away, kicking legs like crazy–it would make Sarah K. proud. 🙂 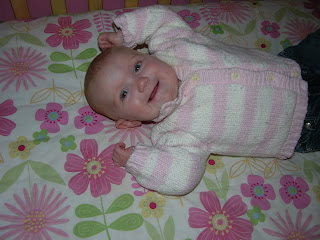 Her happiest time is first thing in the morning. She’s all smiles!
Although, I do need to inform the regular readers that Syd had a blow-out the other day at the Nike Employee store that made the Pumpkin Patch Blowout look like a mild cutting of the cheese. I smelled it first as we were checking out, then thought I’d do a quick change in the parking lot. As soon as I lifted the blanket, I realized this was not a parking-lot-kind-of-job. PEOPLE! It was down both legs, onto her stomach, back and sides, and the carseat itself was covered. How does feces overflow a diaper like a bubbling pot? DISGUSTING. I hated doing it, but I had to just put her back in and drive to my friend Sarah’s house. It was a good thing, too, because the change took about 15 minutes, a four-foot radius of working space, an entire box of wipes, plastic bags and a hazmat suit. Sweet Sarah not only watched all 4 of our kids (including 2 crazy boys who had no naps) while I went to get my hair cut, but she laundered all of Sydney’s clothes AND the carseat cover. SUPERFRIEND! 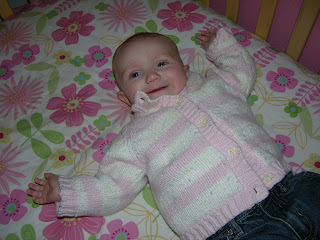