Home Uncategorized A few pics for now…
Uncategorized
As mentioned, we had a great time this weekend. Although we call it camping–because we are at a “camp,” cook and eat outdoors and usually have to walk to get to a restroom–we were not roughing it too badly. Since we had such a young baby, the registration people took pity on us and gave us a room with our own bathroom, which was great. I was determined to play some games this year, and I succeeded in initiating a very competetive game of Pictionary. 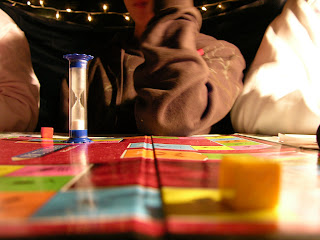 This is my father-in-law, Phil. This is about as uptight as he gets. 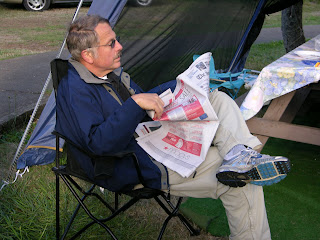 Oh, the water slides! A wonderful addition to WiNeMa since I was a kid. This is Carson on the smaller of the 2 slides. It is a perfect size for him: big enough to be scary the first few times, but after successful completion, he went on it about 20 more times and we had to drag him away kicking and screaming. 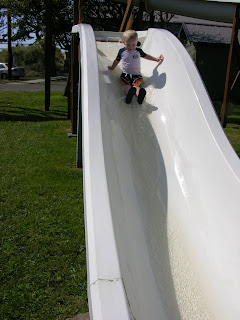 This was his 2nd try. We had our little friend Della (behind him) giving him some help and encouragement.

I often realized my camera was back in our room when I wanted to take some pics, so I’m waiting to get some of the shots I took on my sis-in-law Michelle’s camera. WHICH reminds me of my favorite Carson quotes for the weekend, which I heard one evening after I had been at a long rehearsal:

“Shell. Shell! Can you get your camera so I can show Mom a picture of my poop?” I’m not kidding. I had helped him “get started” on the pot, then had to go sing, so his aunties helped him, uh, wrap up, as it were. However, apparently he was so upset that I wasn’t there to complete my assistance duties and to admire the size of his fecal matter that he asked his aunt to take a picture to show me later. And she did. And I saw it. It was then promptly deleted from the camera, so I’m afraid you will all be denied the honor of witnessing it yourselves. You lucky, lucky people.