Home Uncategorized This building made me cry.
Uncategorized
When most of you readers see this picture, you see a big, ugly warehouse. But for a select few, you see what I see: memories. The name of this eyesore is The Missions Building. It was built in 1971 and is the main gathering place for Camp WiNeMa on the Oregon coast. When I was born at the end of July in 1977, I was very sick. (Mom & Dad, feel free to edit this story if I get any of the details wrong or exaggerate!) I was throwing up blood, and the doctors couldn’t figure out why. I was rushed from Good Sam in Portland to OHSU, where they had a better Neonatal ICU. During that week, hundreds of people in this building were gathered for Week of Missions family camp and were praying for me by name. The doctors had to put a scope down my throat to find out where the blood was coming from. They told my parents that they had never performed this procedure on a baby so small, and it might damage my vocal cords. This last weekend I sang on the stage in this building for what will be the last worship service in the Missions Building before it is torn down to clear the area for a new meeting hall. The spiritual gift of nostalgia that I inherited from my family was in full force, to say the least.
*
(Here’s a pic of Camp WiNeMa that I took on Monday.) 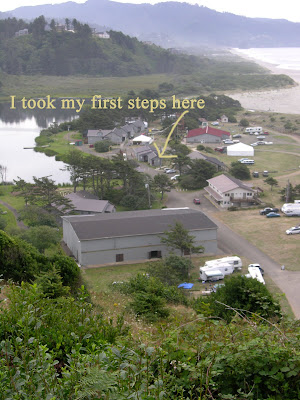 I don’t have time to go through year by year of all the memories at WiNeMa, but here’s just a few: I seriously took my first steps in the old director’s cabin on Labor Day weekend 30 years ago. (That’s the same room we slept in this week. I kid you not.) I went to youth camp for the first time when I was going into 4th grade. I got to sleep on a triple bunk! It was crazy fun. I remember watching awesome talent shows at 2nd High Camp for 4 years. “Fishheads” lipsync is still ingrained in my memory. I decided at camp that I was really interested in going to this little school in California called Pacific Christian College. I had more crushes on boys that I can count. I went down the big slide more times than I can count. I went to Week of Missions with my family numerous times and heard amazing stories that planted in me a deep respect and honor for those who dedicate their lives to full-time international outreach. I came here and went crab hunting with my friends from school for FBCS retreats and listened to the guys perform on the BFB: the Bodily Functions Band. I went to Memorial Day camp with my new boyfriend, Trent, in 1996 and he got a speeding ticket on our way home. After Trent and I were dating, we realized that we had been at the same youth camps and Labor Day family camps for years and never met. This weekend I came to family camp with my TWO kids and watched my son go down the big slide and play on the beach in the same sand I’ve walked dozens of times. 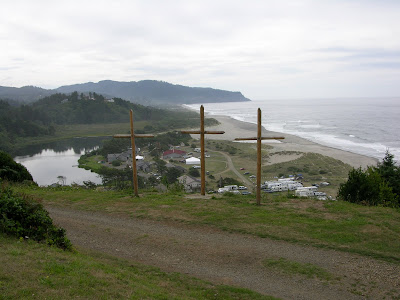 There’s something really special about this place, and we had such a fun weekend. (More pictures and stories on that later.) I felt so blessed to have a new annual tradition with our family here, and it’s even more special that my husband and I both have long histories here. Oh, and the actual tears came at the end of the last session, when we all gathered in a large circle and thanked God for what he had done in that building and for what we know he’ll do in the lives of many more people in the new building. Then we sang “How Great is Our God” a song which I have blogged about before (scroll down that page for the post about that song), and when we went into How Great Thou Art and I lost it. But they were happy tears!