Home Uncategorized Bowling Boy
Uncategorized
A few weeks ago, Aunt Michelle invited Carson and I to join her at her company work party, since they were allowed to bring guests and she had been told the kids get a present. Since Carson is a fan of presents, we accepted the invitation. Although, in all honesty, I wondered how much fun it would really be. It was going to be in a bowling alley and Carson had never been, so I figured it would be too noisy and crowded for him. 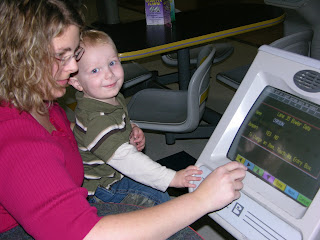 Fast forward to Friday afternoon. We got there a little early and were able to claim the last lane over in the corner, and hardly anyone was there yet. I didn’t realize this was going to be a HUGE party! The entire alley was reserved. We were so early we decided to let Carson be the only bowler for an entire game so he could practice. We showed him how and he warmed up quickly to the idea, although he usually needed a little extra help so the ball didn’t stop 10 feet down the lane. He did accidentally cross that line that begins the lane, where it gets REALLY slippery, and he fell back and bumped his head a bit. That made him shy away from bowling himself, but he still cheered for us. 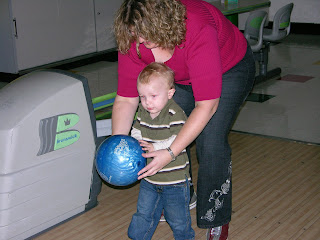 We had so much fun! Plus..there was TONS of free Baja Fresh, Pizza, video games, drinks…and each kid gets a present from Santa Claus! I’ve only ever worked for churches and non-profits, so I’m used to Christmas parties with a potluck dessert and a white-elephant gift exchange, so this was quite the luxury. 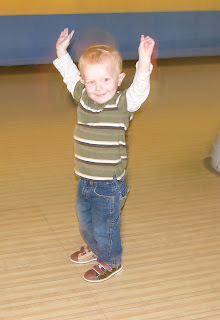 He loved waiting for the ball to come back up through the little machine. Also, that little fan at the back of the ball holder to dry your sweaty hands? (I’m assuming that’s what it’s for.) Lots of time spent with his face getting air blown on it. 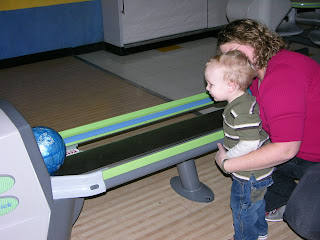 We had to let other people bowl for us because we spent so much of the party sitting at these racecar video games. Since the games were all free, one of us had to actually push the gas pedal for him, or the car wouldn’t move. Usually we just pretend he’s playing and don’t put any money in, and the car looks like it’s going! 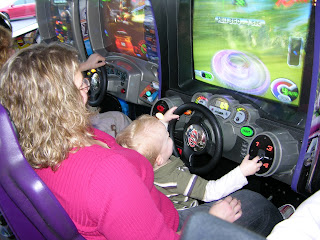 Here’s Carson and Ronald McDonald. Oh wait. That’s me. We both were wearing shoes about 2 sizes too big. 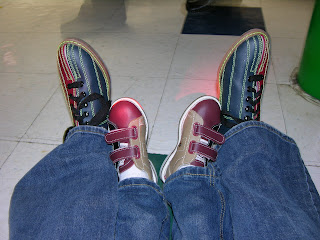