Home Uncategorized You won’t see these in the scrapbook.
Uncategorized
I haven’t been posting much lately, mainly because I don’t have many new pictures. But then I realized I have a handful of recent pictures, but I just didn’t think any of them were very good. So, please enjoy “Photo Shoot Gone Wrong.” My favorite pic is at the end. Mike, I may need some photo lessons.
Nothing wrong with this face! It’s just a little blurry. It’s so adorable that he can now smile on cue, but gets a little frustrating when I want to inconspicuously catch him doing something (usually on video) and he rushes over to mug for the camera. 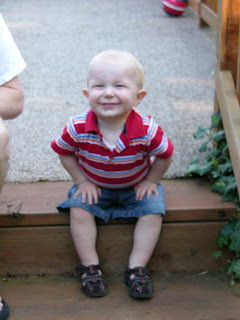 You may not see it in this picture, but I can: Carson has recently begun to show some serious signs of toddler OCD. If he’s eating with his fingers (and, come on, he’s 1 year old, so if he’s eating, it’s usually with his fingers), he’ll stop every few bites, hold out his hands towards me, and give the most annoying sound in the world: a toddler whine. He wants me to wipe his hands off with a washcloth. Ugh. Now I leave a damp washcloth on his tray and am teaching him to wipe his hands off himself. This resolution came shortly after I thought he was whining and pointing at something in the car, but I soon realized he was whining and holding out A BOOGER FOR ME TO TAKE! Um, I don’t think so, dear. Here’s a tissue. In this photo, I think he is wiping barkdust off of his hands onto his pants. Hey. Better than asking me to take it. 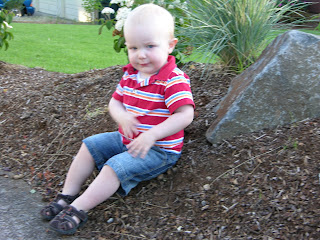 I swear, I do not have early signs of Parkinson’s. I don’t know what was up with me that night. 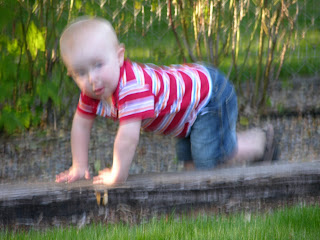 Here he is sporting the infamous Tompkins’ closed eye pose. 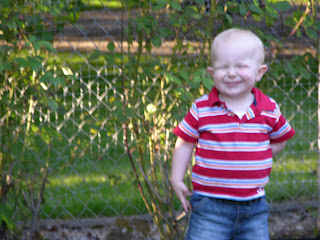 Nice legs, kid! He’s got the same sweet tan his mother has, but fortunately is not wearing socks with his sandals, like his father does. 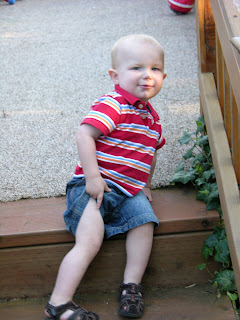