Home Uncategorized June 5, 2012–GOTCHA DAY
Uncategorized
Originally posted Tuesday, June 5, 2012:
Hey all!  I may sound redundant, but than you so much for all the amazing words of encouragement and support.  I really do read them and so does Trent they mean the world to us, and help us feel very connected with home.
I don’t know where the word Gotcha Day came from…I’ve actually never really liked it…sounds kind of harsh, I think–but it’s the term used, and today was ours!  I honestly was preparing for the worst. For crying non-stop all day.  The good news is, that didn’t happen.  But there was, definitely lots of crying and grieving, which is to be expected.
The social workers brought the kids and all their stuff to the lobby and said goodbye.  Asher held it together with only small whimpers until the goodbye, which was actually kind of impressive.  Then he did cry hard.  This was the one time today when I cried too.  I’m trying to not let myself get too deep into his grief, just so I can be strong for him right now (I’ve been in it before and I know I’ll be in it again–don’t ever want to deny or not acknowledge it, just trying not to get too overwhelmed right now.)  But knowing that he was literally saying goodbye to the last people in his life that he knows well, who speak his language well, who know him, saying goodbye FOREVER….it was just too heavy a moment for me to be strong.  I whimpered up the elevator while he sobbed.
We had a plan…we dropped his stuff off in the room and left immediately for the park.  We walked around in the park for 45 minutes, Trent carried him most of the way, and he was off and on crying.  He liked when Trent would run with him and scare away the pigeons and would give a hesitant smile.  But nothing seemed to totally make him happy, so we walked over to the life Center for lunch.
I am not amused. 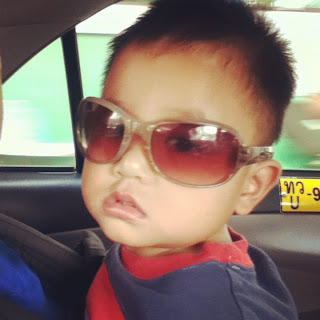 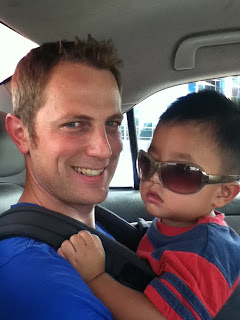 Broken record much?  Lunch was better.  He was happy, smiling, eating, drinking, feeding us.  Lots of stares and some smiles from the Thai customers.
But soon it was past his naptime and he was obviously sleepy.  We came back to the room and got his bottle and precious pink blanket, and tried to lay down with him for his first nap.  We gave it a good try for 2 full hours.  Our plan (and remember, we’re complete amateurs here!  We have no idea what we’re doing!  Everything just feels better with a plan.) was just to stay with him and try to comfort him, but when he would get off the bed, we would gently put him back and lay down with him.  He never got angry and we never got firm.  But he also never stopped crying and never fell asleep.
So around 3:30, we walked down to get our laundry (seems like it all was there!) and took a taxi to Siam Paragon, a huge, HUGE mall that, according to the signs, is “The Pride of Bangkok.”  Once in public and away from the hotel, Saran perked up and was very happy in the carrier with Trent.  He walked for a while, held our hands, even started reaching out for our hands to hold.  He seems to prefer Trent right now, but seriously, what toddler boy wouldn’t?  if you know my husband he is AMAZING with children, especially little ones who like to be silly.  Plus, he is stronger than me, I’m a wuss and get tired of carrying a heavy, squirming toddler unless I have the baby carrier on.  However, Asher doesn’t seem to be rejecting me, just showing a preference for DaDEE as they say here.  I’ll try to post a video on FB that Trent took of Asher and me drinking our smoothies. 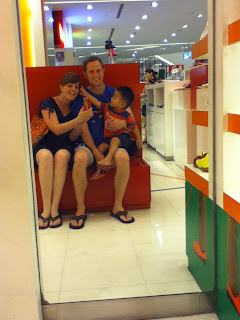 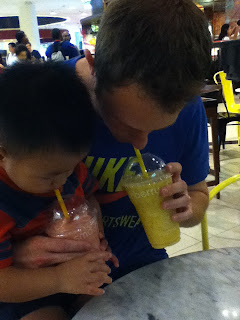 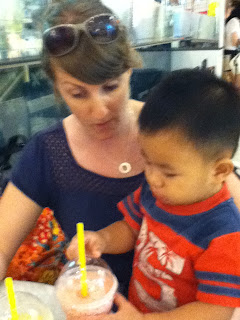 In fact, Saran was getting SO comfortable with us, that we saw a very typical toddler boy coming out!  Not a grieving boy, just a loud, busy, fast, climbing, ornery toddler!  Oh boy.  We bought him some new shoes (osh kosh!) and took a pic while we waited.  I hadn’t been brave enough to bring the big, good camera, b/c I thought we’d be wrestling with a crier, so our pics are pretty grainy.
We literally walked and walked around this mall for hours, just trying to kill time until we could eat dinner, then more until we thought we could go home and he would be tired enough to sleep. 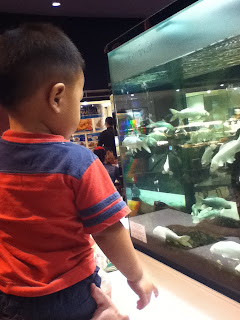 He finally let his eyes close on the ride home, but when we got back to the hotel room…not happy.  We got him changed and in clean pj’s, got his bottle and his blankies, and again we just kind of waited out the grieving.  We prepared ourselves for his first night away from his foster family.  He always wants to get his shoes and go to the door, so we closed the door to the bedroom and he dragged his blankies to that door.  Trent was getting a headache, so he laid on the bed and I laid down on the floor next to Asher by the door.  I said the comforting words I know (Which are about 3 phrases) and then just started to sing.  Pretty much every slow song I know.  About 30 minutes in, his cry turned to a whimper, then he was awake but not crying, then finally, finally….deep breathing and eyes closed.  I didn’t even bother moving him to the bed, so I could sneak out here and post.  I don’t know if I’ll have time in the next few days, but wanted to let you know we’re doing fine.  The grieving is normal and so far Trent and I are doing OK handling it.  I’m anxious to see how tonight goes…if he wakes up a lot and doesn’t go back to sleep, I know our attitude will not be as rosey. We don’t do sleep deprivation well.
Tomorrow morning first thing we go to the Thai adoption board.  We’ve been told this means hours of waiting for a very important 5 minute interview.  Sounds awesome.
Thanks again for all the prayers! We are feeling them!
© Copyright Jen Tompkins 2022. Theme by Bluchic.