Look at me!  Two posts in two days!

I was looking at most of my posts in the last year and they’ve all been so serious.  Although there was the one about cleaning up barf.  Heh. Which, by the by, after I got all preachy about what an expert I am, I overloaded the washer with Syd’s pukey comforter, broke the washer and we had to get a new one.  Expensive lesson in pride.  And basic laundering technique.

To be honest, I have not completely felt like my light-hearted self this year.  It’s been a bit of a serious year, starting even before Asher came home.  Not a lot of brain space left to be funny.  At least not in prose form.  (But you should hear my one-liners to myself in the kitchen!  Knee slappers, I tell you!)  It’s probably a lot like when you add any new kid to a family…it takes a long time to get to a new normal.  I remember feeling like I surrendered body, soul, mind and social calendar each time I had a newborn, and it took about a year to bounce back, so maybe by next month I’ll feel very witty.

We did have a funny situation last week that I think is blog worthy.

Asher and I were home alone, and were headed out to make some copies of some adoption files.  We’re still waiting to be finalized.  (Oh, and also?  The paperwork never ever ever ends. Just FYI.)  I’m not proud to say that the file was temporarily housed at The Dump.  What’s the dump, you ask?  Well, it’s the 18 inches of counter space (already a hot commodity in this house) between the stove and the fridge, closest to the entrance of the kitchen.  It’s home to all manner of important items and junk and everything in between.  It gets organized and cleaned less than I’d like.  Right now I can assure you there is a cell phone, a headband, a spelling list, a lightsaber, junk mail, a recipe book, my purse and a field trip permission slip.

So, last week I went to get the special blue folder with adoption papers from The Dump, and I opened it up to double check before we left.  When I opened it, my heart straight up stopped.  And I screamed.  Loud.  A  huge and—I cannot emphasize this next part enough–extremely hairy spider was sitting there right on my petition to adopt.  I jolted back with catlike reflexes, and grabbed a couple of paper towels.  But in those 4 seconds, big hairy spider had left the blue folder and was crawling through The Dump.  I cannot explain what happened next, other than to say I lost my mind. I had one thought: I COULD NOT LOSE HIM.  I started shoving things frantically off the counter onto the floor.  I would think I had him, then he would crawl under something else, so I would scoop greater amounts of household junk with greater panic, therefore shooting them further and further around the kitchen.  With each jerky movement, I would let out a very girly shriek.  Finally the entire counter space was empty and I had him cornered, and I let my paper towels do the talking.  Triumphant in my victory, I yelled “AHA!” and held up the bug guts in the air.

This is the moment when I finally realized I had an audience. Standing on what was now a completely littered kitchen floor was my son, staring at me wide-eyed and mouth gaping.  I cannot even begin to imagine what was going through his mind.  His freak of a mother was waging full-on war with….paper?  I mean, he’s had a lot of “firsts” in the last eleven months, but this one had to be in the top 5 disturbing experiences.  Then, just because I hadn’t traumatized him enough, I found his expression and shock downright hilarious, and I was doubled over laughing at myself and what an idiot I had been.  Asher very slowly started to give me a half-smile, but it was definitely the hesitant kind of smile you give to placate a crazy person when you are worried they’re going to detonate a bomb.

Between this story and my self-proclaimed hi-larious stand up routines, it seems I am still quite funny in my own kitchen.  So come on over everyone!  Don’t mind the spiders. 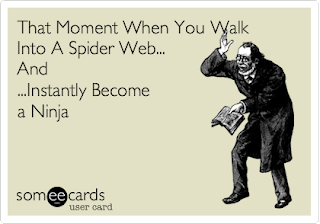