Of all the things I wanted to blog about this summer, but never got around to it, my birthday adventure was at the top of the list.  Went went to the coast with some friends in late July, which happened to be my birthday weekend.  The husbands went golfing in the morning, 18 holes, which we all know means several hours of the moms entertaining 6 kids in a beautiful, but non-child-proofed home.   So in the afternoon, the guys told us to go do something by ourselves and they would watch the kids.

Well, to be honest, my first thought was that I’d rather just take a 3 hour nap uninterrupted, but I don’t often get 1-on-1 time with my friend Kate, so I knew we needed to get out.  I figured we’d go take a walk in old-town, maybe catch a movie, sit in a quiet coffee shop.  Kate had other plans.  My friend Kate is an awesome mash-up of contradictions.  Before she started working full-time, she said she would often spend naptime folding laundry while watching Charlie Rose AND Wendy Williams.  Yes, soak that in for a minute.  You have to love her!  Our little petite brunette friend was not planning to sit quietly this afternoon, sipping chai.  No, she wanted to race dune buggies.  I thought she was kidding.  She was not.

She even took it upon herself to go online and find a couple local shops that rented them.  In the business, they call them sandrails, not dune buggies. We just drove to the shops to look at our options.  We really wanted to drive ourselves around the HUGE (I mean, acres and acres) mountains of dunes this town has–for adventures’ sake.  Turns out we could rent a 2 person sandrail for about $170/hr.  Uh, out of our price range.  We could also rent a quad ATV for about $80/hr, but even with a helmet, I was terrified that I would roll it and snap my neck.  Thank you very much, husband who works with brain injury and paralysis patients, for scaring the heck out of me.

So, we relented and went with, sigh, RIDING in a sandrail, driven by one of their drivers.  It was $28/person for a 30 minute drive.  After I got the guts up to do this whole thing, I thought I was kind of compromising my level of adventure by not driving myself.

As soon as our driver pulled up, I knew I may have misjudged the situation.  He was COVERED in sand, as were his passengers.  The people getting out were speechless, woohoo-ing and high-fiving, faces filthy with sand, except where their goggles covered. It was a 6 person sandrail, but don’t let this description fool you into thinking it was a bus.  This vehicle hauled…uh, you know what.  We traded places with the passengers and got in with a young teenage couple.  It was the four of us and our driver.  He tossed us goggles, checked that our seatbelts were buckled, tightened his bandanna around his head, put some gloves on and gave us a very mischievous smile on his scruffy face.  There was a bar about chest high for us to hold on to, and another bar near our feet.  Without a word Scruffy Bandanna took off out of the parking lot, at a jaunty pace, toward the dunes.  There were 2 other sandrails with us.  As soon, and I mean the SECOND we hit sand, he floored it.  Like a bat out of hell.  Nothing could have prepared me for that surprise, and he certainly hadn’t given us any words of warning. We fishtailed left, right, spun in circles (doughnuts?  I don’t know the lingo here people), flew on the side of hills so steep I was 100%–ONE HUNDRED PERCENT positive we were going to flip.  Kate and I were screaming our heads off.  Like jr high girls in a haunted house.  And each time we would get a mouthfull of sand. I could not shake the feeling that we were on a crazy-scary roller coaster, b/c he would go straight up a steep hill, in my mind I could hear the click-click-click of Space Mountain, and then go STRAIGHT DOWN the other side.  But people?  There are no rails!  We’re not attached to this sand in any way!  Did I mention I was POSITIVE we were going to flip?  We did have a roll bar above our heads, which gave me some comfort, but did not stop me from shrinking my body as low as possible, often smothering Kate if she was up-hill from the drop.  I was gripping that bar so tightly with my hands that I had blisters!

After about 10 minutes, Scruffy Bandanna pulled up to a stop on top of a dune, alongside the other drivers.  We gasped for breath, laughed, smiled and I said to Kate “Should we tell him we are MOTHERS!?!”  It seemed an important piece of information for the person who had our life in his hands.  The teenagers behind us heard us exclaiming and said with surprise and disdain, “Were you guys really scared?”  I said “Oh, Justin and Selena, shut your face.”  I also took time to ask Scruffy Bandanna if he’s ever rolled the rig.  He said “Not once.”  Oh fyoosh.  “Maybe twice.”  And he gave us that sly smile that made him seem like a ADHD 5 year old in a 30 year old’s body.  We were strongly warned not to bring any purses, cameras or other things that were not tightly zipped or strapped to our bodies.  So all I had to capture the moment was my ipod, so we took the opportunity to have Scruffy take our pic.  It was a gorgeous sunny day on the Oregon coast. 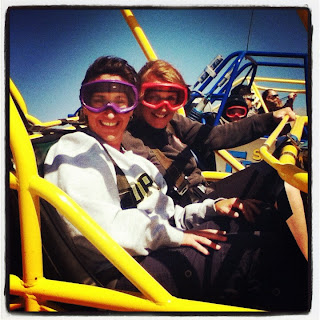 After surviving those first 10 minutes of insanity, I started to loosen up a bit.  SB had kept us upright for 1/3 of my ride, so he had earned a little trust. I was still screaming like my hair was on fire, but I realized I was enjoying it more. I actually LOVE roller coasters, and this was about 15 times as long as most of them. After the break, we took off for more life-endangering fun.  Then we noticed a disconcerting pattern, which was that OUR driver was a bit of a rogue.  The other two drivers would follow each other, but when they turned left, SB turned right.  They would holler out things to him, like, “You’re headed to Devil’s Toilet?”  I kid you not.  If I had relaxed at all, that image tensed me right back up again.  I didn’t know where we were headed, but I did not want to get flushed.  When we were wildly circling the pond at the bottom (I can only guess it was the aforementioned toilet), we were again tipped so far sideways, I was not even bothering to look at the scenery, but rather studying my seatbelt, so when we flipped into the water, I’d know how to free myself.

By the time our 30 minutes was up, I was really having fun, planning all the family and friends I want to coerce on this same adventure.  When we stopped back in the parking lot, we took a quick second to take pics of each other: 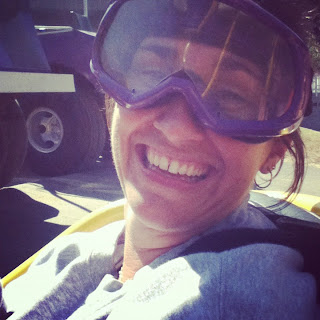 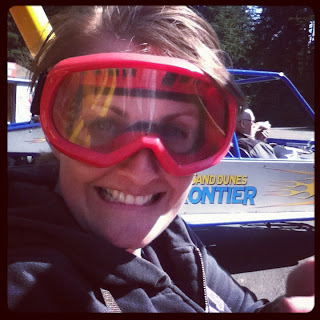 I couldn’t figure out why my legs were sore and I was having trouble walking, and then I realized it was because I was pushing up against that lower bar SO hard with my legs for the entire 30 minutes!  We had sand throughout our clothes and completely engrained in our hair.  But we also could not wipe the stupid smiles off our faces! WE were the speechless, silly high-fivers.  I almost gave Mr. Scruffyface a hug for not killing me.  I held back.  But I did hug Kate and thank her for talking me into the best birthday adventure I’ve had in years.  Hello, 35.  Not planning on slowing down anytime soon.