Hey, I’m back to the normal blog!  We’re home now, and the agency said we’re free to share pics publicly online now.  (We still like to maintain some privacy, so please avoid referencing our last name or hometown.)

I know you all must be thinking I’m obsessed with blogging every detail. You’re kind of right!  The past week has already become a bit of a blur.  I don’t remember which day we did what and when he had this breakthrough or that extreme bout of grief.  The blogging truly has become like a diary for me, and I’m just sharing it with you.  🙂

We’ve been home for less than 24 hours, but I’m feeling good and the rest of my family is occupied (Trent & Asher sleeping, big kids playing in the front with their buddy), so I’m taking a minute to jot down some positive things about the last few days, which have been long!

Reasons I’m feeling grateful:
*For our families!  We missed our big kids like crazy.  It brought me to tears a number of times and made my physically hurt.  I remember another mother in our situation said something so true:  “Being here without them makes the trip so much easier.  And it makes it so much harder.”  I thought that exact thought many times.  But I had such a peace about where they were and whom they were with.  It was our family members, whom we are very close to, and whom our kids know and love and trust.  I also know that they love our kids unconditionally, so I wasn’t overly worried that C and S would drive them bonkers and they’d never want to watch them again!  (I’m not saying C and S didn’t drive anyone bonkers…just that family forgives. Ha!)  I just can’t tell you what a peace of mind it gave me.  Plus, they all rotated in and out of our home, keeping things in better shape than when we left!  Leaving snacks, foods, coffee creamer, mopped floors, cleaned freezers and completed projects when they left.

*Asher has re-learned that baths can be a positive thing.  In our new hotel in Bangkok he took 3 LONG baths.  He smelled great and we used it as a way to pass the time.  When we were stuck in Seoul for 9.5 hours, we paid for a teeny little hotel room IN the airport. (Totally worth it, btw.)  It had a small bathroom with a glass door shower, and a hand-held nozzle.  I put him in there with some lukewarm water, a bar of hotel soap and some IKEA stacking blocks and in that 9 hours, he took two shower baths that were both about 50 minutes each!  (While I sat on the toilet lid and enjoyed the free airport wi-fi.)

*We stayed healthy in Thailand!  This was a big concern for me, and I truly think that being healthy helped us stay stronger emotionally for the draining and intense experience that it was.  Asher, as well, never had more than a minor runny nose, which allowed him to experience several take-offs and landings pain free.  Thank you, Lord!  (Also–I will now swear by Airborne and Emergen-C, because I used both like crazy and it seemed to work.)

*Our son is a good sleeper.  As with staying healthy, I think the fact that we got a decent night’s sleep each and every night was a huge factor in how we were able to function.  He did struggle some, and needed bottles/comfort during the night, but even at the height of his grieving, we had no really long, sleepless nights.  The sleeping also made the plane rides manageable (which is good, b/c when he was awake he was kind of a holy terror.) We happened to have both of our long flights during what his body concerned “night time” which was a plus.  An age-appropriate dose of Benadryl also helped.  😉  He slept literally for 5 of the 5 and a half hour flight from BKK to Seoul, and about 7.5 of the 10 hour flight from Seoul to Seattle.  That big pink silky bedspread was a pain to drag around the world, but I was oh-so-happy we had it!  At one point on the longest flight, he was so agitated in his sleeping on our laps that I just laid that thing on the floor and he slept so much more peacefully!  This lasted for a good 6 hours, but when they turned the lights back on, a flight attendant walked by and said “SIR!  Your baby!  He’s on the ground!”  Trent said “Yes.  He is.”  “He has to be in a seat.”   BOO!  He didn’t wake up right away, but it certainly was the beginning of the end for our peaceful, sleeping child.

*Our son is a good eater.  We have yet to find a food that he doesn’t like.  Although today we tried grill-cheese * turkey sandwiches today and he dug out the cheese and turkey and passed on the bread.  We have learned that some of his favorites are: chicken, grapes, red bell peppers, cucumbers, banana, noodles, rice, pears…those are just some off the top of my head.  This has already made the transition to the US a little easier for all of us.  We are trying to incorporate some Thai-style food as much as possible, but he’s been doing great with the American-type foods we’ve given him so far.  However, he is a MESSY eater.  I swear, it’s like Cookie Monster the muppet….we know that the cookie goes into his felt mouth, and we see lots of crumbs flying, but not sure that anything actually gets swallowed.  For some reason, he (Asher, not Cookie Monster) likes to stick his finger (or fingers) into his mouth while he’s chewing.  It’s like he’s pushing the food around with his finger instead of his tongue.  This makes excessive amounts of drool and chewed up foods fall out of mouth continuously!  But I said I was going to focus on the positives, so let’s just say:  I’m grateful for wet wipes. SO. MANY. WIPES.

*We met so many neat people along the way.  Just on the way home alone, I had some great conversations with people about Thailand, adoption, the pacific northwest, Holt, etc.  One of our favorites was a group of people we were sitting with at the gate in Bangkok.  Our flight was delayed about 45 minutes, so we had lots of chat time (at 12:30 am) with the people around us.  First there was an American grandma with her Thai daughter-in-law and 8 month old grandbaby.  We also met was a Thai woman and her American husband.  And the people we talked the most with was a Thai couple who live in Dallas, who were probably in their early 60’s.  They were sitting right behind us and overheard us telling the others that we were adopting Asher.  They told us they adopted a son (from Thailand after they had moved to the states) 28 years ago.  They both have graduate degrees and retired from high-paying jobs to own a few businesses.  We didn’t talk about when they moved to the US, but they were both fluent in Thai and English, with a strong accent.  They played and interacted with Asher like true grandparents, speaking to him in Thai, which made him smile.  The wife asked me why we chose Thailand, and I told her we were drawn to the program b/c of the foster family aspect, but also did some research about the country itself and found ourselves feeling good about this country being a place we would like to be connected with from now on, a place that we could learn about and teach our son and help him feel connected to his home country.  She had tears in her eyes and said “Thank you for saying that.”  It was really sweet.  She said their son is not married, but they are really wanting to have some grandbabies!

*We survived the first night at home with minimal jet-lag damage.  I’ve heard it gets worse in the next few days, but so far we’re doing pretty well.  We kept Asher awake until 8pm, and we crashed around 9, and although it was a pretty restless night for all 3 of us, with several wakings and cryings, we never had to absolutely give up and get up and play with him.  He settled in for a deeper sleep around 5am and we let him sleep until 8.  We’ll see how the next few days go.  We’ve been trying to play outside and let lots of sunlight in!  Also, I had my first mug of fresh coffee (first fully caffeinated in weeks!) with my coffeemate creamer and it was oh-so-delicious and helpful getting going this morning.

*My big kids are being rockstars with their new brother!  Many of you have seen the picture of them holding his hand and walking in the airport.  Too much!  Again, I acknowledge that we are 100% in the honeymoon stage right now, but I’m loving it while I have it.  Asher walked into the house following Carson and Sydney last night and didn’t hesitate one second.  They spent the entire evening playing and smiling and mimicking and hugging and kissing.  Asher was in first-world toy heaven.  Everywhere he turned there was something new and fun to play with.  His favorites so far are the baby stroller (our ankles and toys have the bruises to prove it) and the strawberry shortcake remote control car–er, strawberry.  The kids practiced saying “Sawat-dee” while we were gone, and Sydney says it constantly to him!  Carson is doing a great job, of altering between calling him Asher and Saran as he gets used to both names.  We’ve also seen Asher respond better to our re-direction and disipline now that the kids are in on it too.  There’s been less spitting and biting for sure.  I feel kind of bad for him, when he has four people saying “MAI-DAI!!” (don’t touch) as he heads for the flat screen!  I give it less than 48 hours before they start to get on each other’s nerves, but for today?  I’m enjoying have two built-in babysitters.  Carson did refuse to change a poopy diaper, though.  Psh.  Whatever.

*Can’t tell you how grateful I am for all of you!  I know that internet community doesn’t replace real-life community.  Fortunately, many of you are both.  But I can honestly tell you that the feedback, the comments, the prayers, the messages…they absolutely sustained me in the days before our departure and as we plowed through the difficult days in the oppressive heat of Thailand!  I’m grateful to share our journey, the beauty and the sorrow.  Thanks for coming along for the wild ride, and I have to tell you…the wild part is really just beginning! 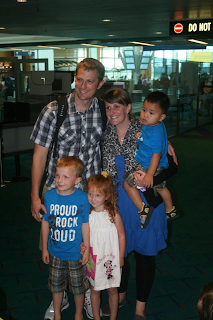