Home Uncategorized When is the carnival?
Uncategorized
Each May our town has it’s special festival–almost every town has their thing, and ours is the third weekend in May. As part of the festivities, they bring one of those chintzy carnivals to the Target parking lot. You know the ones–rides that can fit on semi-trucks that last 22 seconds and cost $4 per person. Elephant ears for $6. “Prizes” that probably cost 6 cents and are broken before you get back in the car. Well, Carson? LOVES THE CARNIVAL. I am not kidding you when I say he started asking in JUNE of last year when the carnival was coming back. I remember, b/c I had to give seasonal references: it’s after your birthday, Christmas and even Easter. It’s not for a LONG TIME, buddy.
*
Well, it FINALLY came, and we’ve driven past the Target parking lot all week in anticipation of the big event. We sported our town pride and went to the parade, then sprinted over to the festival to painfully part with $20 just for the joy it would give my children. On the way there, Sydney was caught up in the excitement and asked with a huge smile, “We get to go on Toy Story ride?!” Trent and I both just started laughing. Oh, sweet Sydney. We tried to explain that the Toy Story ride at Disneyland is the best of the best, and what we were about to experience is…not the best. God bless her youth and innocence–she didn’t complain one bit. Each kids got to do a game: 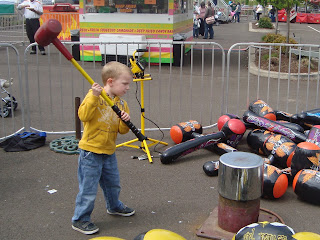 …and a couple of rides. We explained to Carson that he could do more rides if he was willing to go by himself, b/c we had to use up tickets if one of us rode with him. That was enough to convince him. We were a little unsure (as I think he was) about it, considering his debilitating fear that came over him at Dland, but he did great. 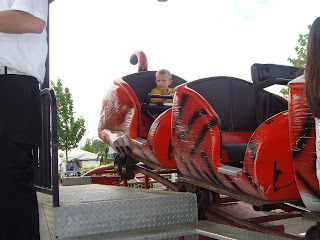 Then he and Sydney went on a ride together, which was pretty adorable. 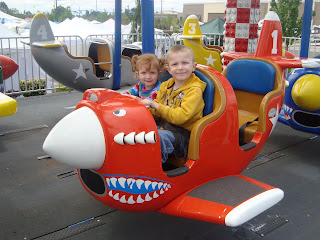 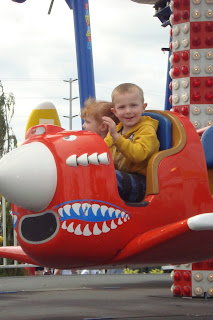 Syd actually liked it so much she chose to go on it again by herself. 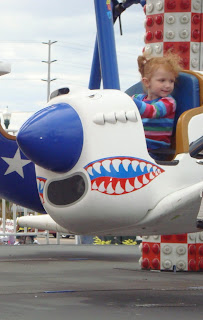 And after 20 minutes of agonizing decision-making (which is SO par for the course with this child), Carson chose to ride the roller coaster again. As you can see, this time he was full of confidence and immitating the tiger at the front of the coaster. 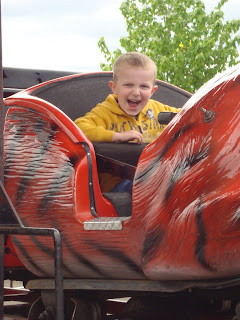 I joke (and we really did cringe) at the cost and the dirt and the *ahem* interesting employees, but really this type of thing is fun for us too. We had a morning together as a family watching our kids run around with excitement and bliss, ignorant of our snobby attitude and elitist amusement park mentality, just happy and living in the moment. And as we drove away, Carson asked when we can go again.
Oh boy.
© Copyright Jen Tompkins 2023. Theme by Bluchic.