Home Uncategorized So just maybe I haven’t screwed them up beyond hope.
Uncategorized
After an especially loud, violent and emotional screaming, scratching and hitting match (btw, both parties were fighting dirty–neither was more or less to blame) over a remote-control Strawberry Shortcake car, an angry mama put two angry kids in angry time-outs. When they had served their time, I quietly opened the doors to their rooms. A few minutes later, Carson came out and said he needed me to write some words on a card (we do this a lot) but he wouldn’t need a stamp because it was “for someone already in this house.” I patiently waited as he dictated. He finished the card with a ballerina drawing–in case you didn’t recognize it immediately–sealed it in an envelope and hand delivered it with a hug. 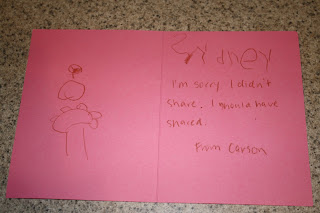 Thank you, Lord, for this sweet little miracle moment. I needed it today!
© Copyright Jen Tompkins 2022. Theme by Bluchic.