Home Uncategorized Signature
Uncategorized
Do you have a signature dish? Did you grow up with one at your house? I guess, in its truest sense, a signature dish would be one that the author cook actually invents and creates the recipe. You know “secret ingredients” and all that. Well, I do not foresee in my future that I will ever create any recipe that has more than 3 ingredients and does not include the instructions “first, roast the marshmallows.” So, for the purposes of this blog post, a Signature Dish is one that the “cook/baker makes often, makes well, makes to the delight of others and that few other people make.”
*
I would like to give a shout-out to some favorite signature dishes in my life, both past and present. (This list is not complete. Please do not be offended if your dish was not mentioned. Be assured that I love it.) OR, recipes that I’ve been given that I love and associate with those people.
-My mom’s Minestrone soup, homemade caramel corn, potato & cheese casserole and otter pops. (Ha–just had to throw that one in there for fun!)
-My Grandma Mulkeys spaghetti, ambrosia salad and white chocolate almond bark.
-Mamanina’s tortillas.
-My mother-in-law’s pear salad, sweet & sour chicken, and grilled salmon and grilled steak. (Father-in-law helps with those last two.)
-My grandmother-in-law’s red velvet cake and eskimo pie.
-My aunt Carol’s white chocolate Chex Mix. (This stuff is my own personal meth. Seriously, I think it has an addictive chemical that makes me crave it fortnightly.)
-Steph’s spinach & artichoke dip, and monster cookies.
-The Bowder’s Mexican chicken and Mounds bars.
Maybe my family and friends can remind me of any that I’ve skipped?
*
Well, I’m not, nor do I think I’ll ever be known for my culinary skills. However, in the last 7.5 years that we’ve been married, I’ve been doggy paddling in the deep end of providing meals for your family, and I’ve emerged a better swimmer. I have a few go-to meals that tide us over, and I’m hoping that I’m establishing a few dishes that my children may assign to me as my signature. All of my recipes, including these favorites, have been borrowed, adopted, stolen or copied, but they’re ours now. 🙂
One of those such dishes I mentioned last June. It will be one of my signatures partly because I love it so stinkin’ much, and will make it forever. It is brownie and ice-cream sandwiches with Magic Shell. 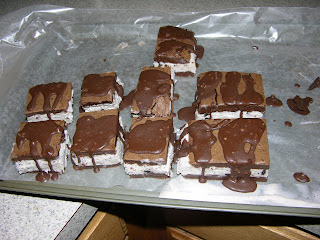 Another dish is my Grandma Mulkey’s spaghetti. I make it a LOT. Part of the reason I decided to write this post at all was because I made this the other night and my husband and my son make me feel like Julia Child when this is for dinner. Carson stops talking for the first time all day to cram his mouth full of the stuff, and Trent goes on and on about how jealous his coworkers are the next day when he takes leftovers. He even gave me the ultimate compliment and said “When Carson grows up, he’ll probably tell his wife that her spaghetti is not as good as yours.” Once my in-laws took Carson to a specialty dessert place and let him look at the glass case with all the cakes and pies. Gpa Phil says, “Well, Carson, what’s your favorite?” He said, “Spaghetti.” Ha! 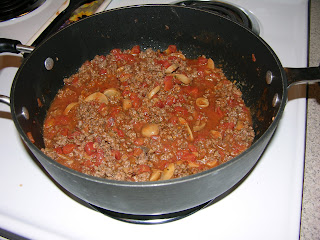 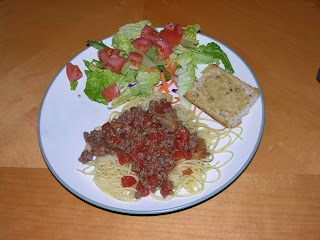 We also have a “no-shirt” rule for Carson when we have spaghetti, because of the many stained shirts. 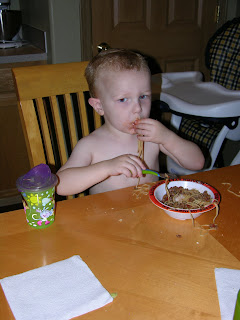 Other than that, I’m still working on my signatures. I’ve stumbled on a few winners, but I haven’t made them enough or had enough people try them to classify in that special category. I have a great apple crisp, a baked chicken with swiss cheese that I got from Margo in the BCC choir, and a crockpot chili from Parents magazine that I make enough to be well on their way. I’ll keep you posted. Any signatures you want to share?
© Copyright Jen Tompkins 2023. Theme by Bluchic.