Home Uncategorized We did it!
Uncategorized
We went camping all weekend with a 6 week old! I was really not sure if it was a good idea. I really wanted to go, but it was supposed to be cold. And she doesn’t sleep through the night. And all four of us sleep in a tent together. But we survived and it went pretty well, thanks to a very involved Daddy, a cooperative big brother, a borrowed snowsuit for warmth and lots of grandmas, grandpas, aunties and uncles who helped with both kids–especially with Carson when I had to disappear into the tent frequently to feed Little Miss who likes to take her sweet time. 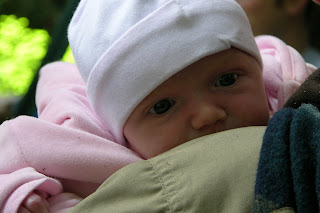 *
This was our 7th annual family campout to Still Creek, near Government Camp on Mt. Hood. check out Mike’s blog for some great pics. We look forward to this trip and plan for it all year. The truth is, the trip is not as relaxing and laid-back as it used to be. We used to just spending time in nature–reading, talking, eating, hiking, boating, etc. The addition of SIX kids has changed that! Unlike at home, where there are some physical boundaries, like, you know, doors and walls, camping kind of requires a one-on-one offense for the three toddlers who move quickly in separate directions–especially considering the swiftly flowing, freezing cold river about 20 yards away. The campground is pretty rugged; there is one outhouse down the road and next to it is a faucet of ice-cold water. Other than that, you are on your own. Fortunately, the Jagger/Bunch families do not camp like most people: we camp in STYLE!
*
For example: please notice a plethora of plastic toys, potties, tricycles, slides, swings, picnic tables, shovels, etc. We eat well and big at every meal–and usually in between as well. We had 7 large tents and 3 large canopies on–I kid you not–what has to be the world’s LARGEST campsite. (Actually, 2 of the tents were on the adjacent site, but STILL!) We also have a campfire burning about 19 hours a day, which was really nice this year because it was extra cold. 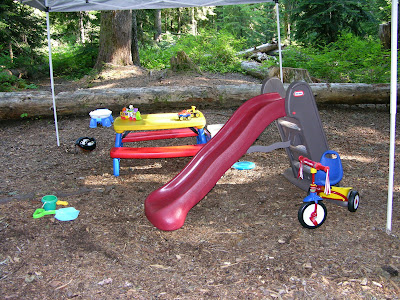 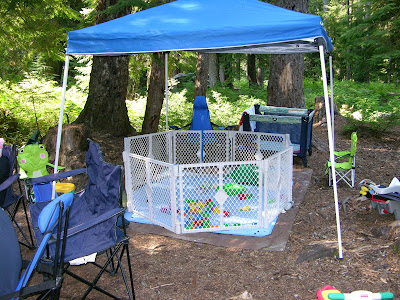 Sometimes people ask me (and sometimes, when it starts to drizzle, I ask myself) why we choose to spend our vacation time like this, when we could go for something more along the lines of warm hotel beds, sandy beaches, etc. I heard a comedian once say he doesn’t work all year to spend his vacation living like the homeless. 🙂 But there’s just nothing like it! For three days, I didn’t hear a phone ring, hold a remote or look at any kind of TV or computer screen. Better yet–our boys didn’t see one either. Instead they played in the dirt, hopped off of and climbed over logs, threw rocks in rivers and ran around ALL DAY. Yes, it was a lot of work. No, it was not relaxing. Yes, it was freezing cold a lot of the time. But this is TRADITION! I’ve always enjoyed it, but it’s meaning even more as we introduce it to our kids.
**

Grandmas and grandpas get to spend time with their grandbabies… 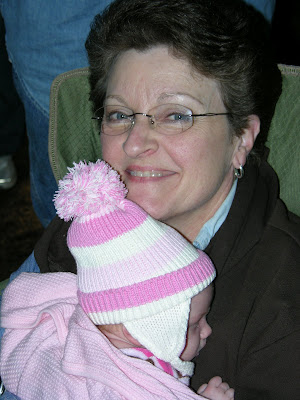 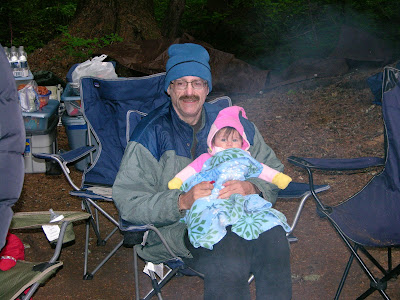 …and pass on some lifestyles and passions to a new generation. 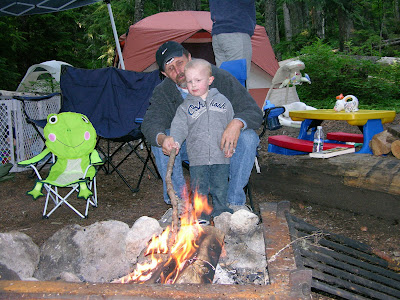 Little boys get to live like little boys: be dirty and pee in the bushes… 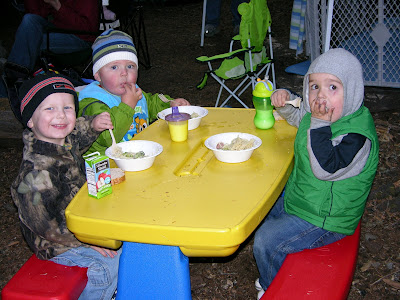 …and young dads get to use an ax and a frisbee more than they use their laptops. 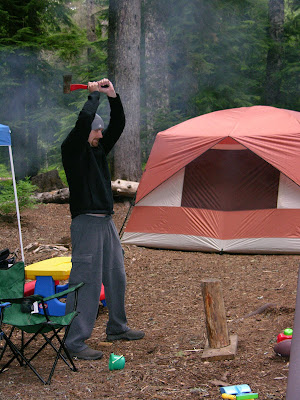 Here’s a shot of all the Tompkins’ stuff. I think we need a bigger car next year. 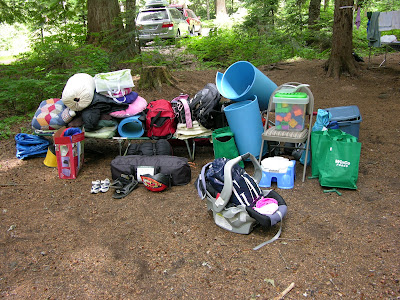 But for those of you who still have a hard time wrapping your brain around the camping experience, I filmed a little tour of our Mt. Hood digs. Just think of it as MTV Cribs with fabric walls. (And for those of you who DO camp…aren’t you always a little curious what the inside of other people’s tents looks like? Now you know about ours.)