Home Uncategorized Oooo! Good one! (Strong opinions to follow.)
Uncategorized
I haven’t posted about American Idol yet, even though we watch it and probably many of you do too. But last night’s episode was so chat-worthy, I can’t help myself! First, I thought Sayesha did a really great job. I really like her voice and the Broadway thing was good to her. I did NOT like Jason Castro. He is one of those one-dimensional musicians that is good at his thing and nothing else. I thought Simon’s comment about him being a kid forced to sing that by his parents was exactly right, and I’ve felt that about a few of his performance. Plus his “I’m inarticulate and goofy-shy during every interview” is getting old. 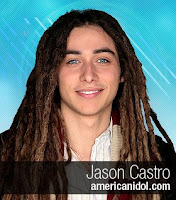 I know Kristi does NOT like him, but I still think David Archuletta has a wonderful voice. He is so controlled and can make just about anything sound good. Plus, I’m a power ballad kind of girl, and that is his specialty. However, I cannot stand to watch him being interviewed or stand there awkwardly grinning and licking his lips before the song. Carly was good too. I think she has the best voice of the girls, but there is something about her delivery and maybe her personality that keep me from totally thinking she should win. 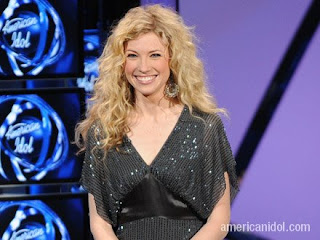 I mean she’s sweet, she’s pretty, she has a pleasant voice and is a musician as well. Of course there’s no way in heck she’s going to win! I almost dropped my Magic Shell last night when she told the band she needed to start the song over! I could not believe it. Trent and I have watched this show most seasons, and I have NEVER seen any contestant do that during a live performance. I felt so bad for her. But (for ONCE) I think I agreed with Paula–I don’t think she should have done that. (Simon and Randy said it was the right thing to do.) You just make it up, hum, or let the band vamp–whatever you have to do to Get. It. Together. Unfortunately, there are times when it is unavoidable and not your decision. Maybe that’s why I was so sad for her–I was having flashbacks! My freshman year in college I was starting a song for our big choir while out on tour. The solo led to a trio of tight harmony–I think it was with JJ and Ember. Well, I started the song out on the wrong notes..I was singing the harmonies not the melodies. Our director stopped the band and said quietly to me “Let’s try it again, Jen.” (Yes, BTW, this is with an audience, and 80 pairs of eyes boring into the back of my head thinking: I should have had that solo!) Then I did it–AGAIN!! She stopped again and looked at JJ, who hummed the right note in my ear. Third time’s a charm! Still one of the top 3 (no-4) embarassing moments on stage. Someday I’ll elaborate on the other three.

But am I the only one who thought David Cook was totally the star of last night? Many people I know have been huge fans of his for weeks. I’ve liked his stuff. (Loved the Billie Jean night.) But, like I said, I’m kind of a power ballad kind of girl. I liked him, but still felt like he was still a little Bo Bice-ish with his rock vibe. But last night, I thought he totally cleaned up and showed that he can SING! His tone is so unique and the song was beautiful. Scoot over–I’m hopping on the bandwagon! 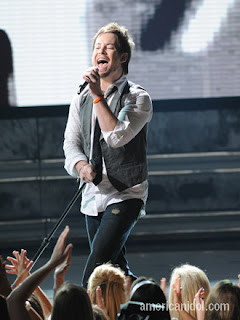 PS: Does anyone know what it up with the spacing on the new blogger template? Double spaced or crammed together–and I don’t remember choosing either?
© Copyright Jen Tompkins 2023. Theme by Bluchic.