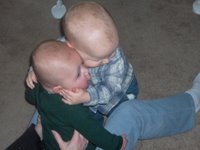 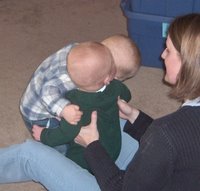 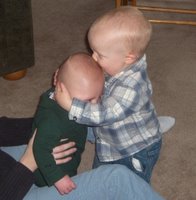 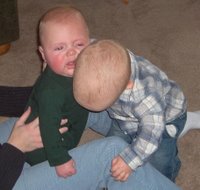 Yesterday we got to babysit Henry over at our place. Carson absolutely could not get enough hugs and kisses in. As you can see by that last picture, Henry did not share the same adoration, but patiently endured the barrage of intense, persistent lovin’ from his big buddy. There are no pictures of the latter part of this lovefest, because Trent had to put the camera down and come help me when Carson decided he wanted to PICK HENRY UP himself. After grabbing behind each sholder and pulling towards him wasn’t allowed, he bent down and grabbed Henry around the waist and was all set for the fireman hold when we quickly nixed that plan. There were several times we made comparisons to Lennie from”Of Mice and Men.”