I forgot to write about a hilarious moment at Carson’s first first birthday party. (No, that wasn’t a typo.) Charlie (pictured) is Trent’s grandmother’s husband, and he is such a neat guy. Carson had warmed up to him and was sitting in his lap, when he reached in Charlie’s mouth and his teeth came out! Carson, who had, up until that moment, been restless and chatty, held perfectly still and stared at Charlie and those teeth like he didn’t know if he should laugh or cry. He stared at Charlie for several seconds waiting to see if the teeth were coming back out, then slowly slid down off of his lap. It was too funny. 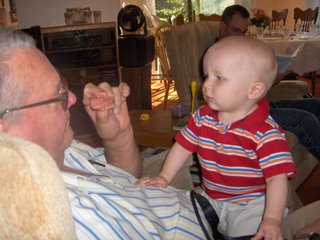 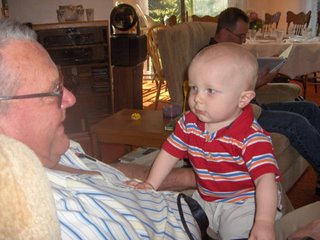