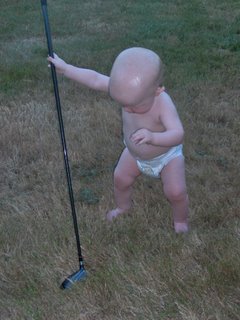 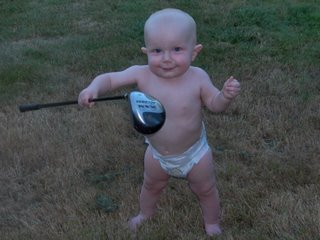 I know…not the most creative title. I’m sure every parent who has taken a picture of their kid with a golf club since the late nineties gives it the same title. He actually does love this __________. ( I want to insert here that I just asked Trent what kind of club this was so I could use another noun other than “club.” I asked if it was a driver or a putter…? He said 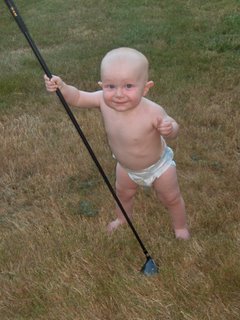 “fairway wood” which was a more specific than I wanted, but such an answer from a golfer. Sigh.) Carson actually does love this fairway wood. He plays with it for minutes at a time, which for a ten-month-old’s attention span is like three hours for us.

Also, I kind of have a personal policy of not letting Carson go out in public in just a diaper, but since this was just in our backyard area and it was freaking hot, I guess it’s OK. 🙂 Plus, he’s so darn cute.