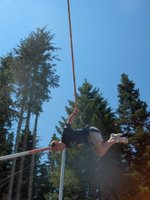 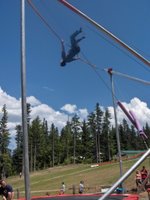 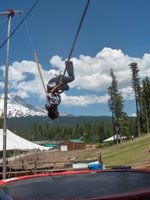 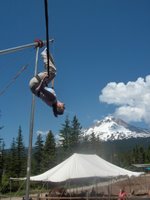 Do you know the feeling you get after you have tried something new and enjoyed it? Even if you weren’t sure you wanted to do it? That’s one of my favorite things. This weekend when we were camping, we went over to Ski Bowl, which in the summer has some “adventure” attractions so they don’t go bankrupt during the off-season. The four of us did the alpine slides and then we tried the “slingshot” which is basically just being tied to a bungee cord and jumping on a trampoline. The bungee (sp?) gives you the adrenaline rush because you can go quite high and do flips, which, lets face it, this scaredy cat would never do on a normal trampoline. As we were getting harnessed up (awkard!) I got that fun/nervous feeling like you get right before going on a scary roller coaster. (Seeing the 8 year old go before us really took the edge off, though.) I read an article that said part of not spoiling a child is not rescuing them from uncomfortable situations. I really want to let Carson go through some nerve-wracking experiences, even if he doesn’t think he’s ready, because I know that each time he tries something new and succeeds, it will build his confidence. Then again, maybe he’ll be that kid that wants to jump and do flips when he’s four. That would be his father’s genes.
© Copyright Jen Tompkins 2023. Theme by Bluchic.