Home Uncategorized June 1, 2012: first day in BKK
Uncategorized
Originally posted on June 1, 2012:
Morning: I wanted to let you know that we have arrived in Bangkok!  The trip was long–11 hours is too long to sit on your bum, and that was just one flight!  The third was 5 1/2 hours, also not short. Our layovers were both pretty brief, and the immigration/customs/baggage claim at BKK was very smooth.  Thank you, Lord!  Arriving in a new country is always an intimidating experience for me, even after doing it a handful of times.  We were very conscious of the fact that we are spoiled Americans, b/c almost every sign we see has an English translation, so we were never too confused.
This is a self-pic of us at the Seattle airport, when we were still fresh and clean!  Let’s just say I’m not sure you would have recognized us at the end.  We realized it was 26 hours door to door, which is shorter than it will be on the way home when we have a toddler with us!

We’d heard wonderful things about Korean Air, and they did not disappoint.  Their flight attendants were all lovely and sweet and spoke English and Korean.  The meal choices seemed to either be very Asian or very American.  I tried to branch out and eat the Asian meals, Trent went back and forth.  One time they came around with a snack choice: either a “hot bun” or a brownie in a wrapper.  We both chose hot bun, thinking it would be like a roll or maybe something sweet since the other choice was a brownie.  Then we bit into it and it had a bunch of beef inside!  That was a surprise for my taste buds, but it was good. We each had our own little screen and a wide selection of movies to watch in English.  In case you were wondering, I watched The Artist, Sherlock Holmes, My Week with Marilyn and 21 Jump Street.

Trent watched Sherlock Holmes, 21 Jump, Chronicle and Contraband.  They also had a single episode of FRIENDS that I found on the last flight between Seoul and Bangkok, and if you know me, that is like comfort food to this girl, so that was lovely to find.
The busy-ness of traveling kept my mind pretty focused and my emotions in check for most of the trip. I did get a little teary when we said goodbye to my mom and the kids, but fortunately, they were all standing at the door waving with smiles, so that made it a little easier.  But when the airplane wheels touched down in Thailand, I lost it just a little.  Not a lot, not the ugly cry, but plenty of tears and sniffling. I just couldn’t believe that we are FINALLY HERE.  In Thailand, the country we chose two and a half years ago, feeling that our child was here somewhere.  The country we’ve stared at on the map and prayed over when it was ravished by floods last fall.  The same time zone and language and air and stars at night as our little guy!
It was a huge blessing to arrive late at night, b/c although it was later than normal, we both were able to just crash and wake up by around 8 or 9 this morning feeling rested and fairly on schedule with the rest of the country.  We are getting settled in our room and plan to go find Neil and Catie sometime after lunch.

They arrived at the hotel early this morning, so I’m sure they are still sleeping.  Thanks for all the love and support, everyone! Hopefully I’ll post again tonight with some fun pictures of our explorations.
Evening: I was telling a friend of mine on FB that if it seems I’m going overboard on details, a lot of the time I’m recording them for myself!  I love reading through scrapbooks and looking at pictures from when my older kids were born, and remember small things like what we ate our first meal home or what show we watched on TV while I was in labor.  Also, as an adoptive family who is waiting to travel, nothing is as therapeutic as seeing another family meet their child.  I’m blogging for myself, for all our friends and family, but especially for all you waiting families!
This one is also for my kids!  I wanted you to see where we are staying.  We’re on the 19th floor of the Pantip Suites hotel.  It is a HUGE suite!  I’m hoping it will be a good place to kill time and play with a toddler.  It is, however…I believe the word that has been used is “outdated.”  But I can’t really complain…it’s going to do just fine.  The bed is hilariously large.  I’m sure it’s two double beds pushed together.  It has to be larger than a normal King.  Where would you even find sheets for such a thing? Trent and I felt like we were sleeping in separate rooms last night!  But I guess if we end up co-sleeping with a toddler, this is the bed to do it in. 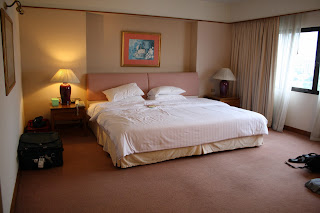 I’m so grateful we brought this little laptop computer, b/c there is no wifi for the iPod or iPad in the room.  I don’t want to go down to the lobby every time I want to get online.  In the room there is an ethernet cable provided and other than the computer and internet being rather slow, it’s working just fine. We even skyped with the kids this morning.  There is a TV with lots of stations, just not lots that we understand.

But BBC, CNN and even discovery channel were pleasant surprises.
This was a large dragon lizard thingy we saw at the park.  The picture doesn’t do justice to how big he was!

What is this fruit?  I have no idea!  But I felt adventurous and wanted to show Sydney and Carson that I was eating fun crazy stuff for breakfast.

We didn’t do a ton of exploring today, and I didn’t get any good pictures.  I’ll try to do better tomorrow.  But we did meet our friends Catie and Neil, and it was so fun to make our first expedition with another couple!  We found Lumpini Park, which is a very large park about 5 minutes from the hotel, and it is lovely. I have a feeling we’ll be going there a lot once we have Asher.  We also located the subway station, 7-eleven, and the Life Center, which is kind of a small indoor shopping center right down the street.  It has several floors, but not really any worthwhile shopping, just salons, daycares, and restaurants.  But did I mention it was airconditioned?  The heat and humidty are unbelievable!  For lunch we tried one of the street vendors down the road.  We bought something that looked like wontons on a stick, but the “chicken” inside was basically a little hotdog wrapped in fried wonton wrapper!
We are all feeling pretty beat, so we called it a day and we’re just relaxing in our rooms this evening.  Trent and I found a small restaurant to eat at tonight and managed to get through the whole meal even though we have no Thai language and they had no English.

Pictures on the menu help a lot.
I did take some pics of our room and the view from our hotel.  There’s also a pic of the pool–as seen from our balcony!  I know we’ll be dipping in that as much as possible!  Tomorrow we’re planning to be more adventurous and do some shopping.  Wish us luck! 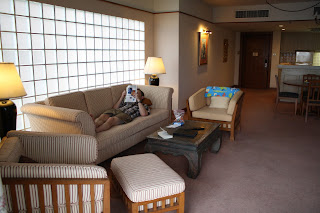 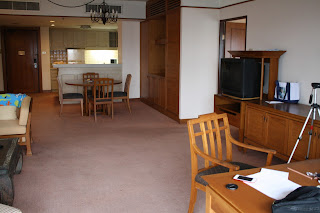 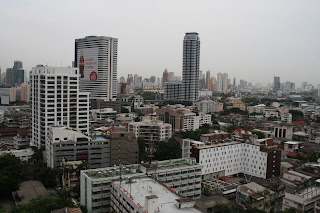 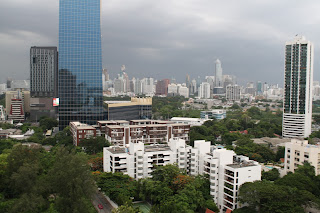 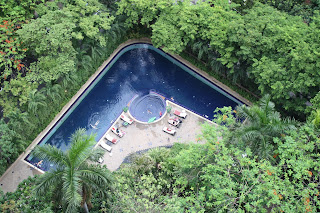