Home Uncategorized Classic Blog Fodder
Uncategorized
Thanks everyone for your encouraging words after my last post.  I heard a story recently about a mom of a newly adopted kiddo who posted online that she was having a hard time, and someone responded “This is what you asked for.”  Yikes.  Thank you for having more compassion for me in my honesty than that woman received.  Yes, this is what I asked for, and I’m so grateful for our family of five!  Doesn’t mean that it is easy.  I decided to take a few blog posts to go back to the old recipe of basic updates on our family.  This is just for the grandparents and long distance relatives. If you’re here for funny stories or adoption related updates, check back in a couple weeks. Also it is for my own memory and posterity.  I’m gonna take a post on each kiddo, otherwise I’ll stall in procrastination of such an overwhelming task!  Of course we have to start with the PFB (Precious First Born.)
Carson started first grade this year!  ALL DAY at school. He chose his first day outfit AND the one-shoulder strap back-pack.  He’s so cool. 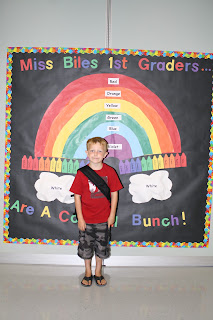 As I mentioned in the birthday post, as far as we can tell, Carson is a very good student. Great reader, good at math, well-behaved.  But this year has been a hard start for him. He gets clingy almost every morning, saying he doesn’t want to go to school. None of his good friends from last year are in his class, which is part of the problem. And also, he’s at school three times as long! This is not lost on him. He actually counted the hours and informed me. We’ve casually talked and pointedly interrogated to see if there’s something else bothering him. It seems he’s just rather be at home. I’m sure lots of kids have a hard time getting used to the all-day thing.   Just last week he told me he “thinks he might” be getting used to his schedule.  Here’s hoping that is true. 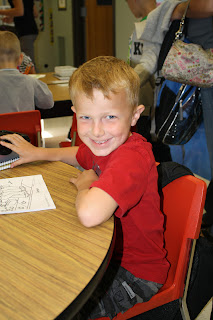 Carson is also an overly scheduled child right now, because he is playing soccer and doing karate. Karate is a once-in-a-childhood thing that fell into our laps (a friend won a 6 month membership at an auction and decided not to use it, sold it to us for the price of ONE month membership), and although it means another 2x/week commitment, it’s awesome and a great thing for Carson. They emphasize respect and discipline and self-confidence and physical fitness. Love it. Trent is coaching the soccer team again, and I’m sure there is a blog post coming about that, b/c friends? Coach Trent takes his role very seriously. If only you could see the spreadsheets, the playtime rotation charts, the practice drill diagrams, the field graphics, the player assessment and improvement scales. What’s that? Yes, all the players are five and six years old. 😉
Here’s some pics from karate class. 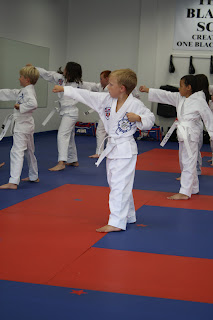 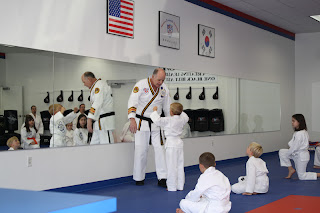 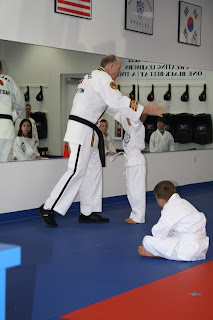 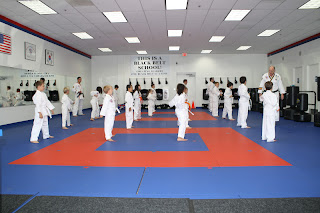 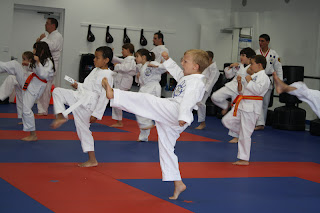 He even tested and earned an orange belt! 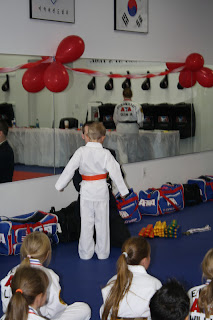 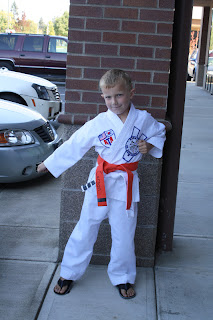 We are pretty proud of this kid, and love seeing him grow in his humor and his understanding of the world around.  We can talk about more grown-up things and share more abstract spiritual concepts with him.  I mean, he’s still a 7 year old boy, so mostly we’re asking him to stop screaming and running in the house, get his hands out of his pants and not teach his little brother how to make fart noises.
I’ll leave you with 2 quick Carson stories.  This morning I put white socks with purple toes on Asher.  Carson was very concerned.  “Why is Asher wearing GIRL socks?!?” he asked.  “Because he is a little brother and that is his lot in life,” I answered.  “He also wears a Hello Kitty bike helmet. Besides, he doesn’t even know the difference.”  This was not acceptable for Carson.  “Well, it is MY RESPONSIBILITY to teach him the difference!  Asher!  You are wearing GIRL SOCKS!!”  It seems Carson does understand responsibility!

Another wonderful moment happened without me, but Trent replayed the story and it made me smile.  Carson befriended a boy on a playground, and Asher was wanting to tag along.  Trent asked Carson to keep an eye on him.  Carson told the other boy that this was his little brother, and we’re not sure what the boy’s response was, but Carson, seeming to have a script memorized, said “Are you surprised?  I know he doesn’t look like me.  It’s because he was adopted from Thailand.” The other boy responded by telling Carson that their family is adopting a little sister from China!  It was just a lovely moment to pave the way for other possible conversations about why his brother looks different–may they all go as smoothly. We were proud that HE seemed proud to be Asher’s big brother!