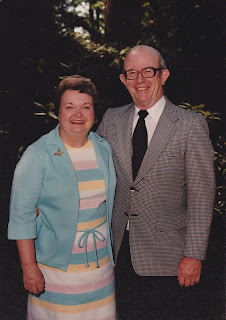 Tomorrow afternoon we’ll be having a service to celebrate the life of my grandfather, Bob Mulkey.  He lived a long and happy life, serving the Lord in many different ministries throughout the years.  He passed away about a week and a half ago, going quickly in the night, at home in his own bed.  Each of the grandkids were asked to share a few of our favorite memories of Grandpa to write down and give to my Grandma.

I remember Grandpa and Grandma always had Doublemint Gum in their kitchen drawer, and we would beeline there as soon as we arrived to get a piece of the usually forbidden sweet stuff.

We had a pretty big extended family, and we rarely missed a Thanksgiving or Christmas dinner together.  I love remembering our large family dinners, when the food was always accompanied by laughter. Sooner or later, the funny stories would start, and each family member would try to top the last with a great joke or surprise punchline. So often, I remember Grandpa laughing at his own story…while he was still telling it! Sometimes, he would be laughing so hard during the story, he could barely finish it!  He would giggle himself into tears.

I also remember his loud and confident prayers before each meal…I swear his already deep voice got even lower when he was talking to God. 😉

I also cherish a special letter that Grandpa sent me when he was living in Indonesia. It was when I was in high school, and was facing a difficult transition. Here is the majority of his letter:

“Dear Jennifer, I am writing you this letter tonight because I want to encourage you. It is my understanding that next year you will be switching schools…
Our family made several moves when your mother was a little girl. Some of these were difficult for the family because established friendships had to be broken with people about which we cared a good deal.  It forced everyone in the family to make new friends.  This was particularly difficult for your mom’s brother Paul. There is no magic formula to make this sort of adjustment easy, but I think a little prayerful preparation can be of great help.

I’m writing you because I believe in what I call “leading” or what some call “prompting.” A couple of mornings each week while I am standing at the bathroom sink shaving, I begin to think of something that I have not been thinking about leading up to that moment. I don’t have to think very much to shave, so I go along with these new thoughts and consider them to be promptings of the Holy Spirit. In each instance there does not seem to be anything that I have been thinking about that brings me up to the point in time when I have these special thoughts….they just happen. Well as I told your Grandma, this morning I was prompted to write you this letter. So here it is! I have learned not to put away these leadings, for I have come to believe that they are given to me by the Lord, and for a good reason. I believe the Lord wanted me to write you a word of encouragement relative to your next year’s school plans. Hopefully we will get to see you before school, but if it turns out that we cannot come home, I still want you to ask the Lord to show you how you can make the best (HIS BEST) of this transition in your life. He does not allow anything to happen to us that He cannot bless,—if we let Him! Sometimes we must go into some weird places, but we never go alone.

Perhaps this letter will encourage you a bit–it was important for me to write it, because I believe I was prompted to, and for HIS good reason!

Of course I didn’t appreciate it as much as I should have at the age of 14, but now as an adult I look back and treasure this letter, and the recording that I have of a grandfather who listened to the Holy Spirit and took the time to send a letter across the ocean to one of his many grandchildren to encourage her to do the same.