Home Uncategorized Sydney-isms
Uncategorized
I think I’ve mentioned before that Syd’s language development is delayed–especially compared to her very verbal brother. But the doc (and Trent’s colleagues who are speech therapists!) has said that as long as she is a)attempting conversation and b)making progress at all, then we don’t need to do anything about it for a while. But it is hard to understand her much of the time, although the three of us can usually translate her special language often out of frequency and context. We just gently try to correct her and have her repeat after us. She does talk A LOT, has progressed enough that it’s time to have a short post about Sydney-isms! 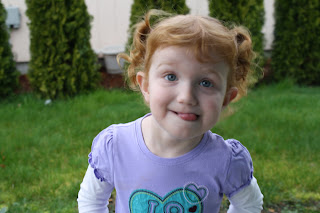 Speaking of gently correcting, Sydney and I were having a special (haha) moment in the bathroom, with her on the pot and me sitting on the side of the bathtub waiting. She was dealing with some constipation issues. She looked at me with a sad face and said “Somesimes, me can’t poop.” I said, “You mean ‘Sometimes, I can’t poop.'” Her eyes got big and her head perked up and she said in surprise: “Somesimes YOU can’t poop?!?!” 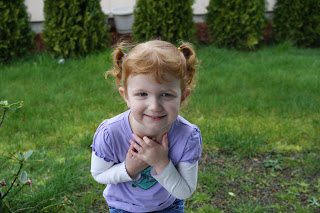 This one is small, and it might not seem cute to you, but of course it is to us. When she’s being mischievious, or caught doing something sketchy, she pulls out a huge grin and, in her version of hello, she says “HI-YO!” 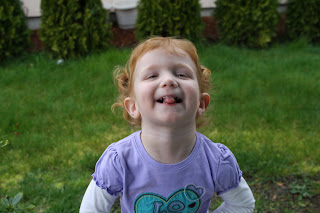 We were in her room the other day, where the crib is still put up–for lack of a better place for it at this time. She smiled and said “That bed for my baby sister.” This was the first time she had said anything that indicated she grasped that a sibling was coming for real. I got excited and said “Yes! It’s for your baby sister OR a brother. We don’t know if we’re going to have a boy or a girl.” She looked concerned and said “But, but, but, but” [an annoying habit she picked up from her brother] “I want a dirl! Mama, I NEED a dirl!” I just laughed and said I wasn’t sure if her daddy could handle another DIRL. 😉
© Copyright Jen Tompkins 2022. Theme by Bluchic.