Home Uncategorized Yes, honey! That barkdust piece is spectacular!
Uncategorized
Sometimes the innocence of a child is just so totally precious. Or “totes presh” as my friend Lori would say. Like when a little one looks up at the sky and says “It’s so beautiful, Mommy! God made that!” [Ok, full disclosure, none of my children have actually SAID that, but they’ve said things in a similar vein of sickeningly adorable.] I love that my son will get excited at simple things, like whenever we see a train, a truck carrying hay (“HEY!” we all shout. Never gets old.) or anything remotely related to Star Wars. My daughter just needs to see something purple in the world and she is giddy with excitement to point it out to me.
*
But let’s be honest. Sometimes that sickeningly adorable cuteness is just, well, sickeningly tiresome. “Yes, Sydney, you found another purple block in your huge bag of pink and purple blocks. Can I get back to my shower now, sweetums?” “Yes, I’m still watching, Carson. That almost-somersault was cool. That one too. Oh, yep, awesome like the last 42. What? Yes, yes, I’m still watching.” It’s not that I mind that THEY are excited about things, it’s just that sometimes I get tired of acting equally as excited about a wet leaf that got stuck on the fence while I was making dinner. (It was on the FAR side of the yard, ya’ll, and I was led to believe it was an imminent emergency.) Hello, burnt chicken breast.
*
But this last weekend we hit the jackpot for easily entertained children. We were with my in-laws at my husband’s paternal grandparents home. They have both passed away (that’s Carson/Sydney’s GREAT-grandparents, not my in-laws), and we were moving stuff out of the home they bought in the seventies. If you can imagine a couple who lived through the depression, packing their lives into a single wide mobile home for over 20 years, you might guess that they place was packed in every nook and cranny with stuff. And a lot of that stuff was inconsequential to the adults…but to my kids it was TREASURE, and nothing less.
*
My supersmart MIL lucked upon a couple of small-ish tool-ish boxes, one for each kid. As she went through bathroom cabinets and dresser drawers, she was able to add little interesting pieces to each box.
This is Sydney’s box. FYI, it was left under a seat in our mini (a nickname I totally stole from Joy), and those marbles? Make a racket like…well, actually it sounds exactly like you’d think 20 loose glass marbles would sound being tossed around in a metal box left and right everytime you turn the wheel. 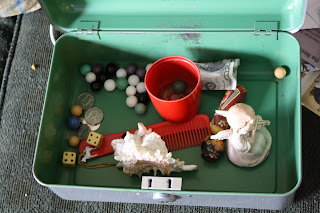 This was Carson’s box, and being five, not two, he appreciated it all the more. Sidenote, “The Lookies” is evidently a comic of sorts about two inquisitive children who adore learning new information so much that they always “look it up.” It is not, thank goodness, some perverted peeping-tom-esque material, as it appears initially. 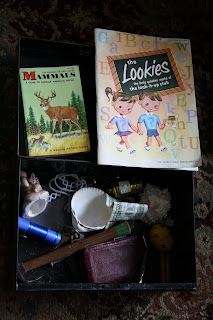 The other sweet time-killer was that pocket-sized encyclopedia of MAMMALS. Carson fervently poured over the first 6 pages of it, and insisted we go looking for Mexican-free tailed bats or a lynx. I pointed out to him that, taking in consideration the habitat we were exploring, we were more likely to find a squirrel. He insisted it be a golden-mantled ground squirrel. You, dear reader, must also take into consideration that our “habitat” was a mobile home park for senior citizens, and that I was hunting with two stomping mammals who don’t understand the concept of “WHISPERING.” So, the only mammals we spotted were ornamental owls, cats, squirrels and even cows. (2) Carson got into an argument with his grandma when she said a human was a mammal. He still is mad at me for taking her side on that one. 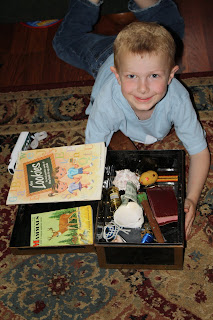 But the thing that I fear more than anything –actually, the thing I fear more than anything is being in an port-a-potty when it is tipped, but the thing I fear almost as much–is my children’s LOSS of innocence. I have to keep reminding myself that, yes, it can be tiring pretending to be excited about a collection of shattered sand-dollars. But I will be so sad when my kids are too cool to collect shells. Or marbles. Or odd mid-century angel figurines that fit into a box.
*
So bring on the wet leaves! The purple blocks! I can’t wait to share in your excitement, my sweet little [golden mantled ground] squirrels.