Home Uncategorized Not as planned.
Uncategorized
Just a warning, this post may contain some TMI, and not the fun “wink, wink, nudge, nudge” kind you might be expecting after a romantic weekend getaway.
*
The weekend started out wonderfully! We had a great first day, Trent booked a really neat Inn on the Oregon coast that I will totally recommend to anyone. HUGE room with fireplace and ocean view, private ocean access, everything felt new and clean, and we got a great deal for the off-season. The sun was shining and we decided to make the 20 minute drive to a highly-recommended sea-food restaurant overlooking a cove. The sun was setting, and the food was SO good! I was very proud of myself (normally a little seafood shy) of ordering the nightly special, which was the Bangkok Special, a yellow curry and ginger sauce with linguine, asian style vegetables, scallops, shrimp and ahi. It tasted delicious and other than the shrimp, which I gave to Trent, I ate most of it!
*
Fast forward to 1 am, I’m leaning over the new and clean toilet puking up the Bangkok Special. I had had an “adult beverage” after dinner, so I figured it was just a bad combo. But by morning, when the puking and *ahem* other food poisoning symptoms persisted, we were both pretty sure it was something I ate.
*
I didn’t leave the room ALL DAY. I didn’t leave the big, comfy King sized bed all day, except to go back to that toilet. Poor Trent! It was gorgeous outside, so he took walks by himself, watched lots of ESPN, read the majority of the book I bought him, and basically stopped telling me when he was coming or going, since I was in the fetal position half conscious and–I think–moaning a bit. Instead of wearing one of the cute dresses that I had borrowed for our official anniversary dinner, I stayed in my pj’s for 32 hours. Trent had Quiznos by himself. Even when there were NO CONTENTS left in my stomach, my body still punished me by puking up what must be green stomach acid. (Told ya! TMI!)
*
My dear husband of 10 years was a great sport and just kept saying it wasn’t my fault, there was nothing I could do about it and that he was getting plenty of relaxing in. 🙁
After a decent night’s sleep, and a solid 8 hour break from the vomiting, I was determined to get out and enjoy our last morning together. Of course, getting out of bed and showering caused me to upchuck once more just for good measure, but I did it and got dressed. We went out to breakfast, where the little cafe waitresses surely thought I had an eating disorder after nibbling on a fruit bowl and getting it to go. This picture will be cherished by me, because it is THE ONLY ONE we got during the entire weekend! 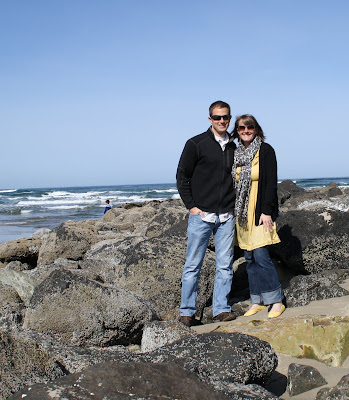 And after walking out to the rocks and back, I was exhausted and completely spent. But I kept saying–this will be a funny story someday! Or at least an interesting blog post later this week. 🙂
© Copyright Jen Tompkins 2023. Theme by Bluchic.