Home Uncategorized For Jack
Uncategorized
I don’t have anything brilliant floating around in my head to blog about, but I remembered this one pic from Cali I forgot to post. I was with some of my girlfriends, enjoying one of the “SWITCH” hours, where the moms and dads switch off the kids so each group gets to go on a grown-up ride or two. We saw Handy Manny and my heart seriously jumped, thinking reflexively that one of my kids loves him. Then I realized it wasn’t one of my kids, but my nephew, Jack. He even had a Handy Manny birthday party! So, even without kids, I asked Manny to pose with me for a pic.
This is for you, Jack! 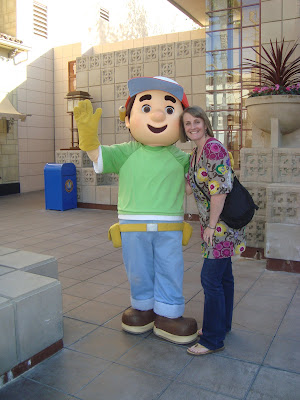 Funny side story: when we saw him, one of my friends (who has a young daughter, evidently not a huge Handy Manny fan) said “Oh, it’s Bob!” [as in: the Builder. Wrong guy, wrong channel.] Manny, who is not allowed to talk, expressed his dismay by throwing his head back and raising his hands in the air. It was pretty funny.
© Copyright Jen Tompkins 2023. Theme by Bluchic.