Home Uncategorized Car-car at Disneyland
Uncategorized
There’s no doubt our little man had a great time at Dland. But it was a bit of a bumpy ride. With this kid, the highs are HIGH and the lows are LOW (and loud). I mentioned in one of my other posts that Trent talked Carson into riding Space Mountain on day one. I’m pretty sure this scarred him for life and I’ve not let Trent live it down. We had to leave (well, usually I made Trent leave with him) numerous lines because Carson was completely and totally freaking out–yelling, crying, screaming, holding onto the railing, yelling “NO! NO! YOU CAN’T MAKE ME GO ON IT!” I mean, he did this even on the Jungle Cruise. THE JUNGLE CRUISE. The ride that pregnant women, people with pacemakers and newborns can go on. It was a bit exhausting.
But, to his credit, Trent worked hard the rest of the week trying to earn back Carson’s trust and help his overcome his fears. He even went to Target early the next morning and got ear plugs and a mini-light-saber to help Carson on any rides that were dark or loud (which are a lot of the rides.) Eventually Carson did ride Soarin’ over California and Big Thunder Mountain Railroad, both with Trent and without too much protest.
*
Here’s some pics of Carson throughout the week. He almost ALWAYS wanted to ride with Trent, so this was one time I got to sit with him. 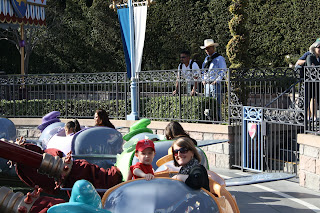 Carson loves the movie Tarzan, and was pretty tickled to walk through Tarzan’s house (formerly the Swiss Family Robinson Treehouse). Trent took this pic while I was somewhere else. Carson repeated and re-enacted this rope climbing experience to me several times before I was able to walk through the house with him and see it for myself. 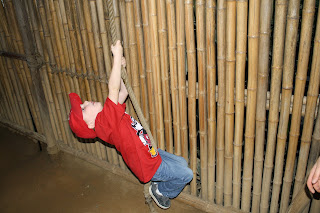 On Tuesday, Carson was having a near-meltdown. He was having little panic attacks in every line. So, Trent took him out of the park to Downtown Disney for some downtime and to get away from the crowds. Of course they went to the Lego Store. 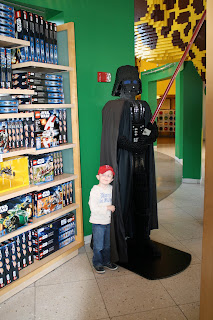 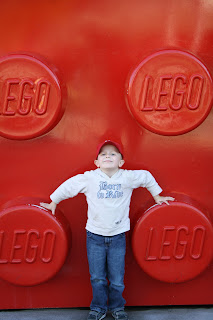 And I WONDER whose idea it was to make a stop at ESPN Zone? Hmmmm….. 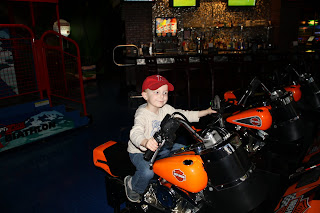 Whatever it was, it worked! The next morning he was back to himself. 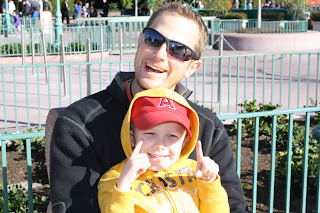 On Wednesday, Carson wore his Star Wars shirt and wanted to try again to do the Jedi Training. We went early, stood in front and he was the first one chosen! We worried that the Jedi man would recognize him and not choose him, then we realized he sees hundreds of kids come through daily, so we were safe. 🙂 Car got to stand front and center this time! (That’s him in the hood to the left of the Jedi Trainer.) 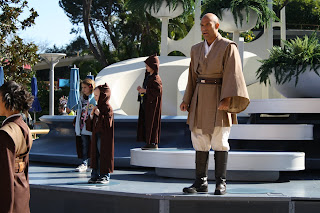 He was even more enthusiastic the second time around. (PS: We were SO bummed the Star Tours was closed for rennovation! I think he would have loved it.) 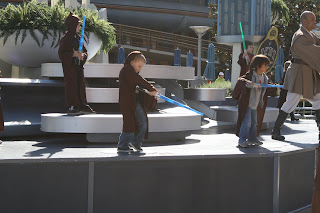 This is the best moment of the show, when Darth Vader arrives:

Here’s a video of his actual fight with Darth Mal.

Unlike his sis, Carson was more than happy to pose with any of the characters we saw. 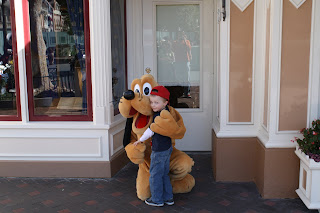 Over in California Adventure, there is an area like a park on steroids. It has rope bridges, a climbing wall, ropes coarse, lookout towers, etc. And it has this kid-sized zip-line. Riding this on Thursday was a minor victory for Carson, who was still too scared to try it on Tuesday. Once he did it once, he was hooked! He just kept going back to the end of the line, again and again. 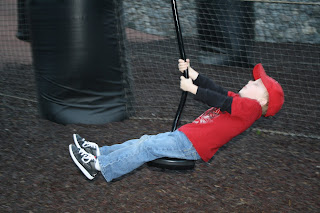 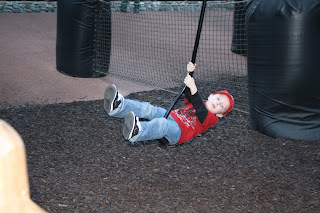 I think you can tell he liked it a little. 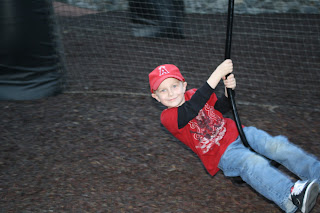 I wish I had some pictures of the Toy Story Mania ride, b/c that was one of our favorites. I’ll have to ask around to see if any of our friends got one. It was in 3-D and we each got to shoot at targets like in a Carnival. Despite his underriding fears, I know Carson had a great time, and he’s currently walking around with Sydney playing Star Wars. He just told her that she is Princess Leia and he is “C-PPO.” I can’t corrent him! It’s just too cute.